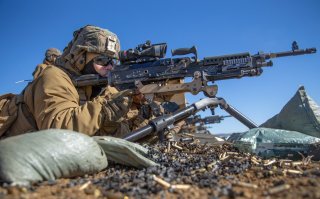 Here's What You Need to Know: The platform utilizes an ammunition chute and internal divider, made from lightweight/flexible material, to keep the belt from twisting and to ensure a smooth feed. It is also easy to see from the photographs how the chute does resemble the one used with the M134 Minigun in the Arnold Schwarzenegger film.

In a case of life imitating fiction, the U.S. Navy has reportedly developed a 650-round ammunition backpack—fittingly named “Avenger”—that has already earned numerous comparisons to the M134 Minigun platform seen in the 1987 science fiction film Predator.

“Unfortunately we cannot disclose this type of information as it pertains to troop location, movements, and tactics,” Lisa Oswald, a spokeswoman for Naval Supply Systems Command, told Task & Purpose.

However, some details of the system are already known. The platform was first reported by TechLink, which described the Avenger as being developed to address the need for “storing and dispensing” split-link belt ammunition from a backpack directly into a belt-fed automatic weapon. The Avenger significantly increases the amount of ammunition immediately available to the gunner and eliminates some if not all belt changes.

Since the development of “light machine guns” during World War I, machine gunners have been limited in how much ammunition they can carry with them.

Moreover, the earliest belt-fed “mobile” machine guns, such as the German MG08/15, were fed from the ammunition belts were held in drums or ammo cans—but typically those options added to the weight. As the rate of fire increased with machine guns such as the German MG-42 and later American M-60 gunners and support crews simply couldn’t carry enough ammo cans to feed the automatic firing beasts!

Often gunners had to carry additional ammunition in backpacks, which then encumbered movement. TechLink noted that currently used backpack ammunition systems were made of steel or aluminum or were designed to carry ammunition cans, which further increased the weight but yet didn't easily allow for dispensing of the ammunition. The current backpacks, which cost around $4,000 in materials alone, held just five hundred rounds of NATO 7.62-millimeter ammunition.

By contrast, the Navy’s Avenger was reported to weigh just nine pounds or roughly 50 percent less than the currently used models and can hold up to 650 rounds on essentially a single belt of ammunition, reducing the time to “reload” as well. It also costs an estimated $300 in material and is reported to be easier to construct.

The platform utilizes an ammunition chute and internal divider, made from lightweight/flexible material, to keep the belt from twisting and to ensure a smooth feed. It is also easy to see from the photographs how the chute does resemble the one used with the M134 Minigun in the Arnold Schwarzenegger film.

As Task & Purpose also noted, this is not the first or only attempt to develop an improved backpack-fed ammunition platform. Another system, which was developed in Afghanistan by an inventive Iowa National Guardsman, was even considered for widespread deployment by the U.S. Army, but eventually was scrapped due to the high development costs.

Winkowski has cited the M134 backpack-fed Minigun—nicknamed “Ol’ Painless”—carried by Jesse Ventura’s Sgt. Blain Cooper in the 1987 action classic as inspiration for his design.

The Navy engineers had apparently never heard of Winkowski’s Ironman, but it is telling it ended up with the name the Avenger given that in the Marvel comic book and film series Ironman is the leader of The Avengers. Additionally, the engineers refuted that it was designed with The Predator in mind.

Then again the Russian military was working on a similar system, known as the Scorpio, so perhaps it is just a case of great minds thinking alike—or else someone owes the producers of that 1987 cult classic a little bit of credit!