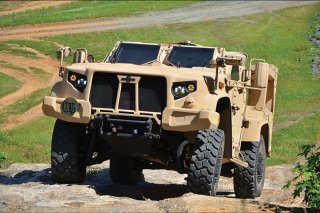 The Army’s Humvees were a war-tested tactical vehicle for decades, yet many of them were decimated in Iraq and Afghanistan by improvised explosive devices (IED). That’s why the Army worked intensely to better protect its Humvees with things like “uparmoring” and extra bolt-on protections. These innovative additions, though helpful, simply could not save the flat-bottomed, low-riding Humvees from roadside bombs. The vulnerability of the low-riding Humvee, and the number of casualties associated with its performance in Iraq and Afghanistan, gave rise to the Defense Department’s push to accelerate live-saving alternatives.

As this tragic trend was unfolding, the Defense Department fast-tracked a number of efforts to engineer, build and deliver troop transport and tactical vehicles able to withstand or counter the IED threat. This led to the creation of the Mine Resistant Ambush Protected (MRAP) vehicles, the MRAP-All Terrain Vehicle (M-ATV), and the Joint Light Tactical Vehicle (JLTV), built by Oshkosh Defense. Now, thousands of JLTVs operate in as many as seven U.S. allied nations. The U.S. Army and U.S. Marine Corps rely on them too.

The JLTV was outfitted with new suspension, raised higher off the ground, and given a variety of new technologies. These upgrades were intended to change the combat paradigm for light tactical vehicles. Compared to earlier light tactical vehicle models, like the Humvee, the JLTV an advanced weapon. It has a 250–360 horsepower engine and a 570-amp alternator capable of generating up to ten kilowatts of exportable power.

Weapons developers claim the JLTV is designed with onboard power to support the Army's network and be able to take advantage of the latest generation of diesel engine technology to maximize fuel economy. This is of great relevance given the Army’s current emphasis on networking. The JLTV will need more computing, electronics sensors and fire control technology to support a new generation of weapons intended for the modern battlefield. Exportable electrical power is increasingly critical for tactical combat vehicles. It supports command and control technologies on a vehicle and can enable power-reliant weapons systems such as lasers or electronic warfare applications.

The JLTV is built with a system called TAK-4i independent suspension designed to increase off-road mobility in rigorous terrain—a scenario quite likely should there be a major war.

The JLTV is also configured with what is called Variable Ride-Height Suspension, described as the ability to raise the suspension in high-threat areas and lower the suspension so that the vehicles can be transported by maritime preposition force ships. The JLTV is also reported to be air-sea-and-land transportable, able to transport on amphibious assault ships, fixed wing aircraft such as a C-130, C-17, and C-5 as well as CH-47 and CH-53 helicopters.

The JLTV, which has been armed with weapons such as a grenade launcher or .50-cal machine gun, is now being armed with heavier weapons, including anti-tank missiles, counter-drone weapons, and mounted guns. Also, it has a central tire inflation system, which is an on-the-fly system that can regulate tire pressure. The inflation system can adjust tire pressure from high pressures for high-speed conditions on flat roads to lower pressures in soft soil such as sand or mud.

Many of these attributes are proving increasingly critical as the U.S. Army and U.S. Marine Corps look to undertake additional types of missions on the battlefield.