WWII Was A Wild War, So Wild That the U.S. Secretly Gave Russia Warships to Invade Japan 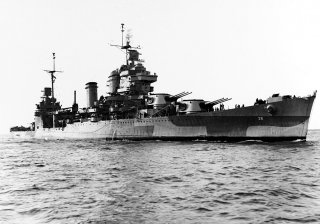 Here's What You Need to Remember: Though Soviet military leaders briefly considered landing troops on the home island of Hokkaido, thirty LCIs would have proven inadequate for all but a token Soviet presence. Besides, some considered that a Soviet presence on the home islands had by then been ruled out at the Yalta Conference. However, the amphibious craft did enable the landing on the Kuril Islands, reshaping international boundaries. Japan still maintains the Kurils are part of its northern territories in a dispute with Russia that continues to this day.

On April 10, 1945 a Soviet freighter slipped up to a quay at a frozen military base on a remote tip of Alaska aptly named Cold Bay. Inside her were over 500 sailors of the Soviet Navy.

The Soviets had arrived to train on the first of 149 vessels the U.S. Navy was transferring to the Soviet Union. That fleet’s secret mission: to transport the Red Army for an invasion of Japan, even while Moscow and Tokyo remained officially at peace.

By early 1945, the U.S. military had ample evidence that an amphibious invasion of the Japanese home islands would prove exceptionally bloody and destructive. If Japanese troops were ready to fight to the death for distant, barren islands like Pelelieu or Iwo Jima, how much worse would the struggle be on densely populated Honshu or Hokkaido?

As a result, U.S. President Franklin R. Roosevelt was keen to draw Stalin’s massive Red Army to support an invasion—but the Soviet leader initially wasn’t interested. Earlier in October 1939, Soviet tanks and Mongolian cavalry had crushed Japanese forces in Mongolia in the decisive Battle of Khalkin Gol. Afterwards, the two nations signed a neutrality pact; the Japanese Kwangtung Army had little appetite for a rematch, while the Soviet Union soon had its hands full repelling the horrific Nazi invasion, which would ultimately cost the lives of 20 million Soviet civilians and seven million military personnel. Finally, in October 1944, Stalin told Roosevelt and British Prime Minister Winston Churchill that he would only commit the Red Army to fight the Japanese three months after the defeat of Nazi Germany—and only then if he was given the ships to do so.

Though the Soviet Navy executed smaller-scale amphibious operations in Arctic, Baltic and Crimean Seas throughout World War II, their land power never developed the massive and specialized amphibious landing capabilities of the Western Allies. Not only did Soviet ships lack cutting-edge technologies, but they were mostly deployed on the Atlantic-facing side of Russia for the anti-Nazi struggle. If the United States wanted Soviet assistance for an invasion of Japan, it not only needed to pitch in the ships to pull it off, but it would have to train Soviet sailors how to operate them. What happened next is detailed by Richard Russell in his study “Project Hula: Secret Soviet-American Cooperation in the War Against Japan.”

In the end a transfer of 180 ships was approved. The most capable were thirty 1,415-ton Tacoma-class patrol frigates optimized for anti-submarine operations, with three 3-inch guns and multiple flak cannons and depth charge projectors. These were supplemented by thirty-four similarly-armed Admirable-class minesweepers that were under half the displacement. There were also ninety-two smaller submarine chasers and wooden-hulled auxiliary motor torpedo boats s as well as four hulking floating workshops to administer repairs at sea. However, the most important donation consisted of thirty Landing Craft Infantry (Large), equipped with ramps that could discharge over 200 soldiers onto a beachhead.

In March, a Soviet Navy delegation arrived in Cold Bay to hash out the training program with U.S. Navy staff of 1,350 led by Captain William Maxwell, a genially-mannered veteran battleship officer. The Russians favored hands-on training at sea while the Americans had more classroom instruction in mind, but in the end both sides reached a compromise.

The first five Soviet ships arrived from April 10 through 14 bearing more than 2,358 Soviet sailors and their commander, Rear Admiral Boris Popov, a former destroyer officer. They were trained over the subsequent weeks while the U.S. vessels filtered into Cold Bay, many necessitating repairs due to shoddy upkeep and difficult Arctic waters. Predictably, language barriers proved a major challenge, particularly for explaining sonar and radar technology the Soviets were largely unfamiliar with. English-language training manuals had to be rapidly translated and prodigal Soviet students were retained to train subsequent cohorts. The Americans and Soviets by all accounts got along well though, and the latter reportedly loved shooting the deck guns.

Despite linguistic challenges and breakdown-prone sub chasers, starting May 17 a steady stream of ships was decommissioned from U.S. Navy service in special ceremonies and sent to the Soviet Union with trained crews. By July 31, over 100 vessels had arrived at the port of Petropavlovsk.

Eight days later, on August 8—three months to the day after the surrender of Nazi Germany—the Red Army’s mechanized juggernaut rolled into action against the hopelessly outgunned Japanese Kwangtung Army in Manchuria.

Even as Project Hula continued, the Soviet Navy put its newly acquired vessels to use in the waters adjacent Japan and Russia. Their targets were two parallel island chains that led like stepping stone to the Japanese home island of Hokkaido: the huge Sakhalin island, which ran parallel to the Russian coastline and was split between Japanese and Soviet control, and the Kuril island chain running from the Russian Kamchatka peninsula to the Japanese home island of Hokkaido.

Soviet ground forces in North Sakhalin began their invasion of the southern half of the island on August 11. On August 15, Japanese forces were ordered to cease resistance and the Soviet Navy began a series of amphibious landings starting on the 16. However, the Japanese garrison continued to fight back, and so the landing sustained casualties seizing the coastal ports of Toro and Maoka after the official surrender.

The assault on the Kuril Islands, begun at dawn on September 18, proved even messier. Sixteen Project Hula LCIs were deployed to land Soviet marines on Takeda Beach of Shumshu island. However, coastal batteries on Cape Kokutan sank five of the LCIs, leaving the marines stranded without their radios or heavy weapons. The beachhead was nearly overrun by counter-attacking Japanese armor, though Soviet air support, anti-tank rifles and naval gunfire ultimately defeated the lightly armored Type 94 and 97 tanks. After several days, the Japanese garrison finally adhered the surrender order, and Soviet naval forces began securing the remainder of the Kurils.

Project Hula was only terminated on September 4, two days after the official Japanese surrender on the USS Missouri, having trained 12,000 Soviet sailors and transferred 149 ships into Soviet hands. Four months later, the U.S. Navy began demanding the return of the ships.

However, a little thing called the Cold War had by then begun to gum up U.S.-Soviet cooperation. Twenty-seven of the patrol frigates were finally returned in October 1949, minus one which had run aground. Fifteen of the twenty-five surviving Landing Craft wouldn’t follow until 1955. By then the vessels were in such poor condition the U.S. Navy didn’t even wish to incur the expense of scrapping them, so the remaining ninety vessels were scuttled or sold for scrap back to the Soviets.

Though Soviet military leaders briefly considered landing troops on the home island of Hokkaido, thirty LCIs would have proven inadequate for all but a token Soviet presence. Besides, some considered that a Soviet presence on the home islands had by then been ruled out at the Yalta Conference. However, the amphibious craft did enable the landing on the Kuril Islands, reshaping international boundaries. Japan still maintains the Kurils are part of its northern territories in a dispute with Russia that continues to this day.