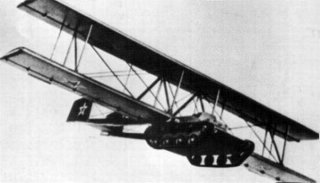 Here's What You Need To Remember: On the A-40’s one and only trip, the mothership had to ditch the glider, as the tank produced a large amount of drag, which cased the mothership’s engines to overheat. The tank and pilot driver apparently landed safely, shed the wings, and drove back to base.

Caleb Larson holds a Master of Public Policy degree from the Willy Brandt School of Public Policy. He lives in Berlin and writes on U.S. and Russian foreign and defense policy, German politics, and culture. This article first appeared in April 2020.