America Should Open the Door for Hong Kong 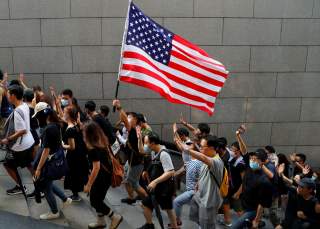 For about five months now, Hong Kong citizens have been protesting against Beijing’s increasingly authoritarian control over their semi-autonomous city. Despite the intensity of their struggle, it seems increasingly likely that eventually, Beijing will use whatever means necessary—including the military—to gain total control of Hong Kong.

“Anyone attempting to split China in any part of the country will end in crushed bodies and shattered bones.” Such are the words of Chinese President Xi Jinping. Though directed at Tibetians, he was sending a message to Hong Kong protestors.

If Beijing is bent on a full-scale crackdown, Washington can’t stop it—but that doesn’t mean America has no options to respond. The United States can provide Hong Kongers with a way to escape by welcoming asylum-seekers with open arms.

Unfortunately, President Donald Trump seems to disagree. He recently decided to slash the number of refugees the U.S. accepts to 18,000 in the 2020 fiscal year, which is an outrageously low number in a world full of people eager to stay alive. After all, when the refugee resettlement program was created in 1980, the cap was set at 232,000 refugees.

For years, the people of Hong Kong have been worried over the very real erosion of their civil liberties by the Communist Party in Beijing. Hong Kong has long been governed by its own mini-constitution, called the Basic Law, which secured certain political and economic freedoms not found in the rest of China. That means they have basic liberties like freedom of speech and a more laissez-faire economy. But that Basic Law is set to expire in 2047, and it’s widely expected that China will finally and totally reclaim Hong Kong, eliminating the freedoms its people have become accustomed to.

The government has been working toward that end for some time. For example, Beijing had previously promised that Hong Kongers would get to choose their leader in an election with universal suffrage by 2017. Shortly after, Beijing announced that only their pre-approved candidates could stand for election. Hong Kongers have protested over the years and are also upset about the high costs of living and rent. Tragically, the Communist Party has been deaf to Hong Kong’s concerns and is bent on pushing the city to kneel to the government’s will.

That’s why America must allow in Hong Kongers who claim asylum. The United States was founded as a great experiment in democracy and human rights, and America is at its best when it leads by example. This is an important shot for Washington to demonstrate the real leadership and what the American project is about.

The influx of talented young professionals, too, would be a boon to America’s economy. The United States has a shortage of qualified workers, and businesses need employees to continue to expand. Moreover, young Hong Kongers with degrees and transferable skills are eager to start families, but don’t want their children to grow up under Beijing’s shadow. They would be happy to become Americans.

Entrepreneurship would see a surge, too. Immigrants are twice as likely to start a business than native-born U.S. citizens. In fact, one-fifth of all entrepreneurs are immigrants and 55 percent of America’s $1 billion startups were founded by immigrants. If China wants to push away some of its most talented people, the United States should be all too glad to have them.

The Communist Party in Beijing appears to be trying to wait out the protests, worried over the economic consequences that would ensue if the military were to put the boot on the conflict. Indeed, Hong Kong is China’s most crucial link to the outside world—60 percent of China’s outward investment goes through the city. The country knows that violent repression would crash the local stock markets and scare off investors. It would also heighten confrontation with the United States and Western democracies more generally.

But that doesn’t mean China won’t use mass state-violence. If Beijing feels like the protests are inspiring unrest in the mainland and threatening Communist rule, China will eventually use force to stop it. But whether it does or not, Washington should be ready to offer Hong Kongers a place here. After all, America is the “Land of the free and the home of the brave”—two boxes easily checked by the people of Hong Kong who desperately want liberty.

John Dale Grover is a Korean studies fellow with the Center for the National Interest, assistant managing editor at The National Interest, and a senior contributor to Young Voices. His work has appeared in Defense One, Fox News, The Hill, Real Clear Defense, and The American Conservative.