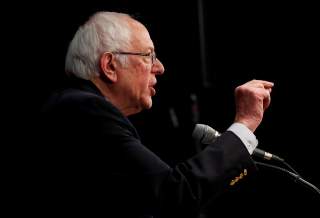 Although he resists announcing the end of his candidacy, Bernie Sanders has almost no chance of becoming the Democratic Party nominee for president following his weak performances on both Super Tuesday and the six primaries the subsequent week. The impending demise of his presidential bid may come as a disappointment to some Americans who held out hope that a Sanders presidency would usher-in a more peaceful U.S. foreign policy. Sanders himself fosters the image that he is a staunch advocate of peace, asserting at one point that “I apologize to no one” for opposing the Iraq war and other conflicts.

Proponents of realism and restraint should hold their tears, though, about the failure of Sanders’ candidacy.

Despite his claims, there were several unsettling aspects to his foreign policy track record. He has been more anti-war in his public statements and writings than in his actual voting record. His opposition to dubious U.S. military interventions has been noticeably more persistent and intense when Republican presidents initiated such missions than when Democratic presidents did so. Sanders has been disturbingly susceptible to arguments that so-called humanitarian wars are justified to protect suffering civilian populations from the abuses of brutal dictators. He is vocal that presidents need to seek explicit approval from Congress before launching armed interventions, but even on that issue his record is inconsistent. Sanders failed to condemn Bill Clinton or Barack Obama for brazenly bypassing Congress and waging major presidential wars in Kosovo and Libya, respectively, much less moving to generate congressional action to stop their usurpation of the war power. Apparently, White House invocations of the humanitarian war justification encouraged him to maintain silence in those cases.

Indeed, although he seemed reluctant to endorse Clinton’s earlier 1995 decision to bomb Serb positions in Bosnia, he did nothing to oppose that step either. Indeed, Sanders became noticeably more hawkish regarding the Balkan conflicts as the decade wore on.  When the administration led a full-scale NATO air war against Serbia to force Belgrade to withdraw from its restless, predominantly Albanian province of Kosovo, Sanders was on board. He voted for a Senate Concurrent Resolution (sponsored by Senator Joe Biden) that authorized the president to conduct air operations and missile strikes against the Federal Republic of Yugoslavia (Serbia and Montenegro). Sanders’ vote on that measure was especially telling. There was substantial opposition to the resolution in both houses of Congress.  Indeed, the authorization failed on a tie vote in the House—with Sanders voting for war. It was apparent that there were numerous legislators who were more dovish than Bernie Sanders regarding the Kosovo intervention.

He also signed on to the so-called war on terror during George W. Bush’s administration, voting for the dangerously vague authorization for the use of military force (AUMF) in 2001, as did virtually every other member of Congress. Sanders was warier, though, of Bush’s propaganda offensive for a war to oust Iraqi dictator Saddam Hussein. Congressional Democrats were badly split on that issue.  In contrast to party heavyweights such as Hillary Clinton, Joe Biden, and John Kerry, Sanders remained firmly in the faction that resisted military action and favored continued inspections and diplomacy with respect to Saddam’s alleged weapons of mass destruction. He voted against the October 2002 joint resolution authorizing Bush to use force, if necessary. Sanders would later boast “I not only voted against that war; I helped lead the effort against that war.” How much his stance reflected sincere, prescient aversion to a regime-change war with uncertain and potentially destabilizing ramifications, and how much reflected partisan hostility to the actions of a Republican president, though, is nearly impossible to determine.

His opposition to military interventions certainly became more tepid again once Barack Obama entered the Oval Office. Contrary to Hillary Clinton’s jibe during a 2016 presidential primary debate that Sanders had endorsed the U.S.-led military campaign against Libya’s Muammar Qaddafi, he only sponsored and voted for a resolution condemning Qaddafi and calling on the UN to pressure him to leave office. However, even though he attacked Clinton for pushing the Libya intervention as Obama’s secretary of state, (making the snarky comment “I’m not quite the fan of regime change that she is),” Sanders did not speak out against the war once it began, even though Obama ostentatiously declined even to seek congressional approval.

A similar murkiness characterized his stance on the civil war in Syria. He supported Obama’s decision to send 250 U.S. troops to that country, ostensibly to train and assist “moderate” Syrian rebels trying to overthrow Bashar al-Assad’s regime. When Obama asked for congressional approval in 2013 for air strikes in response to Assad’s alleged use of chemical weapons, though, Sanders had adopted a noncommittal stance, stating that he would keep an open mind but had several concerns and reservations.

Once Donald Trump took office, Sanders became more consistently vocal in his opposition to U.S. military involvement in Syria. He condemned the Trump administration’s missile strikes on Syria for another alleged chemical weapons incident as “illegal and unauthorized”—a much stronger stance than he took when Obama proposed such retaliation in 2013.

A similar hardening pattern occurred with his attitude toward Washington’s support of the Saudi-Arabian-United Arab Emirates war in Yemen. Sanders said little about that offensive when it began in 2015 and continued in 2016.  When Trump continued Washington’s support, though, Sanders became steadily more negative.  He voted for a December 2018 Senate resolution to end the U.S. assistance to the Saudi war effort. The following month, he co-sponsored a bipartisan joint resolution mandating the removal of all U.S. forces from Yemen not authorized by Congress.  Both the Senate and House passed that measure, but supporters were unable to override President Trump’s subsequent veto.

The overall recent trend of his views does suggest a more serious commitment to opposing dubious military ventures and insisting on the restoration of the congressional war power.  Some observers saw a dramatic change bordering on a revolutionary one in his foreign policy perspective. That may be true with respect to policy in the Muslim world. In March 2019, he signed a pledge along with Senator Elizabeth Warren and other progressives, calling on the United States to end its wars in Afghanistan, Iraq, and Syria.  Yet, when Trump announced a partial withdrawal of U.S. troops from northern Syria in late 2019, Sanders joined in the Democratic-led hawkish chorus condemning the move as a betrayal of Washington’s Kurdish allies in Syria.

It is even less certain whether Sanders’ alleged advocacy of restraint applies to U.S. policy in other regions. He has loyally supported the Democratic Party’s promotion of a confrontational policy toward Russia, including backing U.S. military aid to Ukraine. Sanders also at times has embraced the rhetorical neo-McCarthyism epitomized by the Left’s repeated innuendos about Trump allegedly doing Vladimir’s bidding—even though the president’s Russia policy actually has been more hardline than the policy Obama pursued.

Responding to media revelations in February 2020 that he had received a briefing from U.S. intelligence agencies that the Kremlin was trying to assist his presidential bid, Sanders lashed out and stressed his opposition to Moscow’s supposed policies. “Unlike Donald Trump, I do not consider Vladimir Putin a good friend. He is an autocratic thug who is attempting to destroy democracy and crush dissent in Russia," Sanders said. "Let’s be clear, the Russians want to undermine American democracy by dividing us up and, unlike the current president, I stand firmly against their efforts.”

Sanders exhibits few dovish sentiments when it comes to policy toward Russia, and that stance is troubling.  Russia is the one power in the world that has the strategic weaponry to end American civilization in an armed conflict.  Caution and restraint is more essential regarding Washington’s relations with that country than any other.

A widespread impression exists that Bernie Sanders is the ideological successor to such antiwar Democratic Party stalwarts as Eugene McCarthy and George McGovern.  But Sanders’ performance regarding issues of war and peace is more murky and complex.  At best, he has been an inconsistent, ambivalent, advocate of a more peaceful U.S. foreign policy. Granted, his policy views seem less hawkish and meddlesome than those of Joe Biden.  And arguably they are better than those of Donald Trump, who has talked the talk but rarely walked the walk when it comes to curtailing Washington’s foolish overseas interventions.  Nevertheless, a Sanders presidency would likely have been a major disappointment to Americans who want a more restrained and sensible foreign policy.

Ted Galen Carpenter, a senior fellow in security studies at the Cato Institute and a contributing editor at the National Interest, is the author of 12 books and more than 850 articles on international affairs.  His most recent books are Gullible Superpower: U.S. Support for Bogus Foreign Democratic Movements (2019) and NATO: The Dangerous Dinosaur (2019).

Image: U.S. Democratic presidential candidate Senator Bernie Sanders announces that he will be continuing his campaign for U.S. president at least through his March 15 debate with former Vice President Joe Biden as he holds a news conference in Burlington, Vermont, U.S. March 11, 2020. REUTERS/Lucas Jackson.