Can Pompeo Force the UN To Punish Iran—Or Will Russia Stop Him? 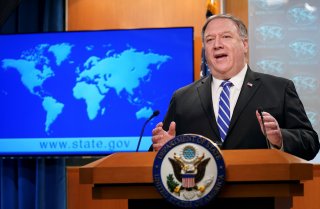 State Department official Brian Hook wrote this week that the United States is “prepared to exercise all legally available options” to force the United Nations to extend its arms embargo against Iran, a day after Russia’s UN ambassador called the Trump administration's plan “ridiculous.”

The UN Security Council agreed to gradually lift sanctions on Iran as part of the JCPOA, a 2015 deal between Iran and six world powers regulating the Iranian nuclear program. But any “participating member” of the deal can automatically snap back sanctions in response to Iranian misbehavior—and the Trump administration plans to invoke this power within a few months.

Hook, who oversees Iranian affairs, wrote in the Wall Street Journal on Wednesday that the Trump administration has “drafted a resolution” to extend the UN arms embargo on Iran and will trigger snapback if it does not pass.

He cited a recent letter signed by a majority of Congress asking the Trump administration to stop the arms embargo from expiring in October—although several signatories have made clear that they do not support snapback.

President Donald Trump declared that he was leaving the JCPOA in 2018 and imposed economic sanctions aimed at creating “maximum pressure” against the Iranian government. Iran has retaliated by ramping up its nuclear program beyond the limits of the deal.

The Trump administration has claimed in recent months that it is still a “participating member” for the purpose of punishing Iranian violations, and Hook argued on April 30 that the word “participant” is not “defined in a way to require participation” in the JCPOA.

Hook said in an interview last week with CNBC that “there is not going to be much of [the JCPOA] left to join” when the Trump administration leaves office.

“This is ridiculous,” Amb. Vassily Nebenzia, Russia’s representative to the United States, told reporters in response to a Tuesday question about snapback. “They are not members, they have no right to trigger.”

The European Union also disagrees with the U.S. interpretation, but snapback is designed to avoid a veto from other UN members. The United States would ask the Security Council whether to lift sanctions—and then simply veto its own resolution, preventing them from expiring according to the U.S. interpretation.

But there is no “supreme judicial authority” to decide that the U.S. interpretation is valid, emphasized Richard Nephew, who ran the Iran desk at the National Security Council from 2011 to 2013 and oversaw sanctions policy at the Department of State from 2013 to 2015.

It would instead come down to whether UN member states decide to enforce the resolution. The Trump administration has refused to say what it would do if Russia and China defied snapback to sell Iran weapons.

The current strategy “suggests that [Secretary of State Mike] Pompeo seriously believes Russia and China will take this resolution being shoved down their throat as a reason not to export tanks” based on the idea “that the words on the paper matter more than the power dynamics behind them,” Nephew said.

Richard Johnson, who oversaw JCPOA implementation at the State Department until 2018, worried that snapback without other states’ buy-in could erode the “credibility” of UN resolutions.

“There’s a lot of times multilateralism is the best way or the only way to get things done,” he told the National Interest. “It’s hard to build institutions. It’s a lot easier to break them.”

Nephew and Johnson both emphasized that it had been nimble U.S. diplomacy—and not any arms embargo—that pushed Russia to voluntarily delay its sale of anti-aircraft missiles to Iran in 2010.

“We had to work very hard and be very clever to get” snapback into the JCPOA, Nephew added. “We are not getting such a snapback mechanism ever again.”

This article initially stated that Brian Hook's interview took place on Thursday. It, in fact, took place last Friday. The article has been updated to reflect the actual date of the interview.