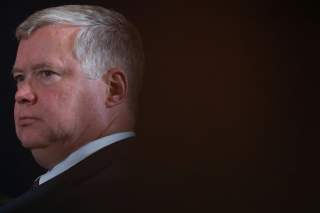 Stephen Biegun is a consummate professional. Those who have worked with him describe a workhorse who has his head on straight and who takes the issues in his portfolio seriously. Compared to some of the other policymakers who hold senior positions—including his boss, Secretary of State Mike Pompeo—Biegun has an impressive resume over a quarter-century long. Before serving as the executive secretary of President George W. Bush’s National Security Council and a senior executive at the Ford Motor Company, he toiled for over a decade in the Capitol Hill trenches.

This experience is likely what helped smooth the way to his near-unanimous Senate confirmation (90-3) last December as deputy secretary of state. Biegun, however, has entered his new State Department role at an incredibly tense time. Career foreign service officers are either losing confidence in the building’s leadership or getting pushed out by politically-appointed ambassadors for highly suspicious and unethical reasons.

Biegun has only been on the job for a little over a month, which means he has yet to make a significant mark on Foggy Bottom one way or the other. Given that President Trump could very well lose re-election this year, Biegun could have less than a year to clean up the mess this administration has made. According to current and former U.S. officials who spoke to Politico on February 7, the former Ford Motor executive has hit the ground running.

If Biegun wants to establish order in the building, he may need to concentrate less on North Korea, where the diplomatic process has ground to a halt, and more of his time on internal matters.

Relations between Congress and the executive branch are rarely smooth-sailing in any circumstances, particularly when one house is under the control of a different party. But Secretary Pompeo’s stewardship of the State Department has ushered in an era of violent, inter-branch turbulence. Pompeo’s childish temper and bitter partisanship have had a detrimental effect on lawmakers’ opinion of the State Department in general. Fighting over line-items in a draft budget and sparring over policy disagreements is one thing, but using your influence as America’s chief diplomat to take shots at the opposing party for no other reason than to be confrontational is another. Quite frankly, this behavior is beneath the dignity of the office). Biegun can’t change how his boss acts, but he at least can try to use his relationships on the Hill and the solid credibility he has built up on both sides of the political divide to begin repairing the damage.

2. Get morale back into the building:

When Rex Tillerson departed, State Department employees were hoping the worst had passed. For a while, Pompeo seemed to recognize that one of his first priorities as the new secretary was to motivate the troops and get the department’s “swagger” back. But nearly two years into the job, there is no swagger to be found—just a canyon-sized gap between the leadership and the diplomats and civil servants who work on the ground floor.  A government survey finds that the Office of the Secretary is a center of poor leadership and teamwork. When assessing the staff, political ideology and excessive loyalty to the president seem to be more important qualities than merit-based performance. Many former diplomats with decades-long careers clocked-out on Pompeo’s tenure long ago.

Given that Pompeo will likely stick it out for the remainder of the year rather than reenter politics and run for a Senate seat in Kansas, Biegun will be forced to play multiple roles: the janitor who cleans up after his boss spills the milk; the therapist who sits the worker-bees down and assures them that their service to the nation is highly appreciated; and the bridge-builder who begins to reopen the channel of communication between the ground floor and the 7th floor.

3. Inject pragmatism into the decision-making:

Pompeo is what you could call a conventional Republican interventionist (perhaps the controversial “neocon” label is in order?). He is a big believer of U.S. military might, Washington’s economic power, and its ability to squeeze concessions out of the most stubborn adversaries. His speeches sound like preludes to a 2024 presidential campaign and what a Pompeo foreign policy would look like: you’re either with America or against it.

Pompeo’s views, however, are not necessarily the State Department’s views. One of Biegun’s primary responsibilities will be to ensure the assessments and recommendations of all of the bureaus and agencies reach the secretary’s desk before a final decision is made. Just as important, Biegun must also insist that Pompeo go beyond his fascination with Iran, read all of the briefing papers, and weigh the judgments of the professionals with an open mind. This will be easier said than done and could very well be a lost cause, but Biegun will be able to go home at night knowing he at least tried.