Can the U.S. Stop Syria’s Kurds From Selling Oil to Assad? 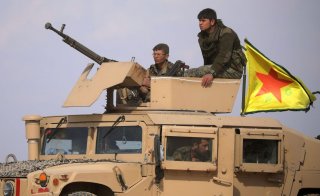 The United States should provide the U.S.-backed Syrian Kurds a waiver to sell their oil on the international market, the head of a Syrian Kurdish news agency argued.

The Kurdish-led Syrian Democratic Forces currently control the largest oil fields in Syria, which President Donald Trump has sent U.S. troops to protect. But the Kurdish-led opposition is unable to sell the oil legally, forcing them to deal with Syrian ruler Bashar al-Assad, whom the United States has condemned as a dictator.

Thomas McClure, head of the Rojava Information Center, said that the Kurdish-led administration has repeatedly asked the U.S. government for exemptions to the U.S. economic sanctions blocking Syrian oil exports.

U.S. sanctions dating back to 2011 make it illegal to invest in or import Syrian oil. The sanctions include an exemption for older, mostly-defunct Syrian rebel groups, but make no mention of the Syrian Democratic Forces currently in control of northeastern Syria.

These U.S.-backed forces have had to deal with middlemen and smugglers, many of them connected to the Assad regime, to sell the oil. The poorly-maintained, makeshift oil facilities have also created an environmental crisis in areas along smuggling routes.

McClure argued that sanctions waivers would allow the Kurds to deal with international energy markets, helping to “preserve this area outside of Assad” and “reduce the interconnectedness of these two economies.”

The economic situation in areas both inside and outside Assad’s control has been worsening, as a U.S. law called the Caesar Act tightens economic sanctions on the country.

“Even for us, it’s hard to buy vegetables. For our Kurdish and Arabic neighbors, it’s even harder,” he said. “It’s a question of whether all the suffering of the Syrian people is worth it.”

Charles Lister, senior fellow and the Director of the Syria and Countering Terrorism and Extremism Programs at the Middle East Institute, countered that sanctions “may potentially exacerbate some of the effects of the economic crisis, but they’re not the cause.”

“Sanctions don’t have that immediate of an effect, especially on a national economy,” he said, accusing Assad of creating a “self-inflicted” economic crisis through “brutality” and “mismanagement.”

Lister and McClure agreed on one thing, however.

The policy towards oil reflects a “lack of clarity,” they both said.