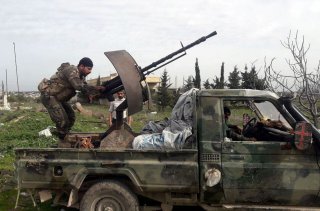 U.S. special envoy Joel Rayburn said that it is a “fantasy” that the United States will “walk back from holding the Assad regime accountable” as new U.S. sanctions hit the Syrian economy.

The State Department has issued its first round of economic sanctions on Wednesday under the Caesar Civilian Protection Act, which aims to hold Syrian ruler Bashar al-Assad accountable for human rights abuses during Syria’s civil war.

Rayburn, who also serves as Deputy Assistant Secretary of State for Levant Affairs, told the Washington Institute for Near East Policy that the law is a signal to anyone “dreaming” about normalizing ties with Assad.

“It aims to foreclose any potential economic benefit from a so-called military victory” and “deny the regime access to international financial markets until a political solution can be reached,” Rayburn said.

He pointed to United Nations Security Council Resolution 2254, which calls for UN-supervised elections, as the “roadmap” for ending the conflict so that the Syrian government “can be allowed to rejoin the global community and take part in the global economy.”

Rayburn also tied the sanctions to the Israeli-Iranian conflict, declaring that Syria must also “sever its ties with Iranian military forces” and “drop its hostility to its regional neighbors.”

A spokesperson for the State Department later told the National Interest that the neighbor threatened by Syria also include Jordan, Lebanon, Turkey, Iraq and “the Gulf countries.”

The State Department and the U.S. Treasury named 39 entities in its first batch of sanctions, including members of the Assad family, influential Syrian businessman Mohammed Hamsho, and an Iranian-sponsored militia called the Fatimid Brigade.

Rayburn warned that there are more sanctions “in the pipeline.”

“We expect this to be a summer of Caesar,” he said.

The Caesar Act is named for a Syrian military defector, codenamed Caesar, who revealed evidence of mass torture in Syrian prisons.

The law was passed as part of the U.S. military budget in December 2019. It targets high-level Syrian political figures as well as the country’s banking and construction industries.

Critics have claimed that the Caesar Act will harm ordinary Syrians by preventing the country from rebuilding after nearly a decade of civil war.

The sanctions could also undermine the U.S.-backed, Kurdish-led autonomous administration in northeast Syria, both a congressional report and the Kurds themselves have warned.

The threat of sanctions had already caused the Syrian currency to collapse, wreaking havoc on areas inside and outside of Assad’s control.

Rayburn, however, insisted that the law has “extensive exemptions for legitimate humanitarian activity.”

This article has been updated with a statement from a State Department spokesperson.