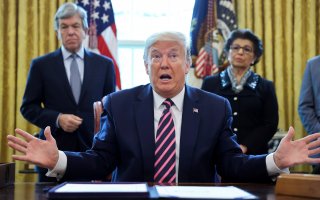 Syrian Kurdish leader Ilham Ahmed said that the Trump administration has left it “unclear” how the U.S.-backed, Kurdish-led faction in Syria can avoid being slammed by U.S. economic sanctions.

The Trump administration insists that upcoming sanctions on Syria are meant to punish Syrian ruler Bashar al-Assad, but the U.S.-backed, Kurdish-led Syrian Democratic Council publicly worries that the planned pressure campaign will slam their own self-governing territory in northeast Syria as well.

U.S. envoy Amb. William Roebuck had promised last month that the planned sanctions “will not target the regions of North and East Syria or the Syrian people.”

But Ahmed, executive president of the SDC, said at a Friday video conference hosted by the London-based Kurdistan Solidarity Campaign that the situation is still “unclear.”

“We have no information beyond what [Roebuck] said,” she claimed through a translator. “There is nothing that we can report in terms of practical implementation.”

The U.S. State Department has told the National Interest that it will not comment on “the substance of private, diplomatic conversations” or “future or potential sanctions designations,” but it insists that the Caesar Act is “in solidarity with the Syrian people.”

Ahmed claimed that the Caesar Act could create a “very serious economic crisis” for Syrians by devaluing Syria’s currency.

The Caesar Act bans foreign individuals from dealing with the Syrian government in certain areas—including oil refining and construction—and experts worry that it could seriously hinder postwar reconstruction.

U.S. diplomatic efforts were more successful on another front—reconciling the SDC with other Syrian Kurdish opposition groups.

“There have been important developments in terms of a Kurdish-Kurdish dialogue,” Ahmed said. “This has been with the facilitation of the Americans, and so far, the process has been quite good in terms of bridging differences, but the Turkish state is trying to prevent this dialogue between different Kurdish fractions.”

Turkey has gone to war with the Kurdish-led forces in northeastern Syria—accusing them of links to Kurdish secessionists within Turkey’s borders—and supports rival Syrian rebel groups.

U.S. officials have been asking the SDC to talk to other segments of the Syrian opposition, including the Turkish-backed groups.

Ahmed claimed that the SDC was willing to work with the broader Syrian opposition, although she had reservations about the “Islamist character” of some rebel groups.

“In general, we are willing to work with anyone who shares our principles,” she said.