Will the U.S. Exempt Syria’s Kurds From Crushing Sanctions? 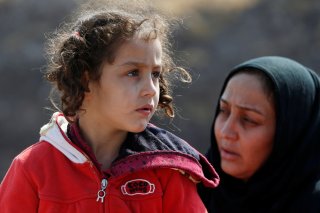 The U.S.-backed, Kurdish-led faction in Syria worries that it will become collateral damage of new economic sanctions on Syria as the State Department sends mixed messages on the scope of the sanctions.

Congress set a June deadline for the President to impose sanctions against the Syrian central government under the Caesar Civilian Protection Act. Critics warn that the sanctions may also slam the Kurdish-led Autonomous Administration of Northern and Eastern Syria.

The autonomous administration warned that “there will be opportunities for ISIS to regroup, and the threat will return to Syria and the whole world” under the Caesar Act sanctions in an open letter last week.

Salman Baroud, the administration’s top economic official, said that the sanctions “will contribute to the deterioration of the already deteriorating economic situation and lead to a severe decline in the value of the Syrian currency” in an interview with Hawar,  a news agency close to Syrian Kurdish leadership.

The Trump administration has signaled that it does not want to target the Kurdish-led administration as U.S. envoy Amb. William Roebuck tours the region in a shuttle diplomacy effort between rival Kurdish parties.

Roebuck told the independent North-Press Agency last week that the sanctions “will not target the regions of North and East Syria or the Syrian people.”

He had said the same thing—that the Caesar Act excludes “autonomous regions”—to officials in the Kurdish city of Kobani, according to a readout of their meeting by Hawar.

The State Department declined to comment on “the substance of private, diplomatic conversations” or “future or potential sanctions designations” when asked by the National Interest.

Amb. James Jeffrey, the State Department official in charge of Syrian affairs, has suggested that the sanctions are already fine-tuned enough to target only Syrian ruler Bashar al-Assad.

“Our sanctions do not include sanctions on humanitarian or medical goods, those items can flow freely,” Jeffrey told the London-based newspaper Asharq Al-Awsat. “And the sanctions are carefully selected and packaged to target regime figures and not the average person.”

“I cannot help anyone if after almost a decade of Assad’s terror, they still believe Assad over the international community,” he added.

Congress had passed the Caesar Act—named for a Syrian defector who revealed mass torture and war crimes by pro-Assad forces—as part of the U.S. military budget in December 2019.

It bars companies from doing business with the Assad government, but critics say that the act would target most imports and post-war reconstruction investment.

An official religious freedom report presented to Congress last month called for a sanctions exemption in Northern and Eastern Syria in order to preserve “a crucial center of positive religious freedom conditions in Syria.”

The Trump administration has made it clear that it sees Caesar Act sanctions as an important tool to push for a political solution to the Syrian Civil War that would eventually sideline Assad.

“Caesar Act sanctions are in solidarity with the Syrian people who have long called for a lasting political solution to the Syrian conflict,” a State Department spokesperson told the National Interest. “The Act seeks to deny the Assad regime the financial resources that his regime uses to fuel its campaign of violence and destruction that has killed hundreds of thousands of civilians, and is meant to send a clear signal that no external actor should enter into business with or otherwise enrich such a regime.”