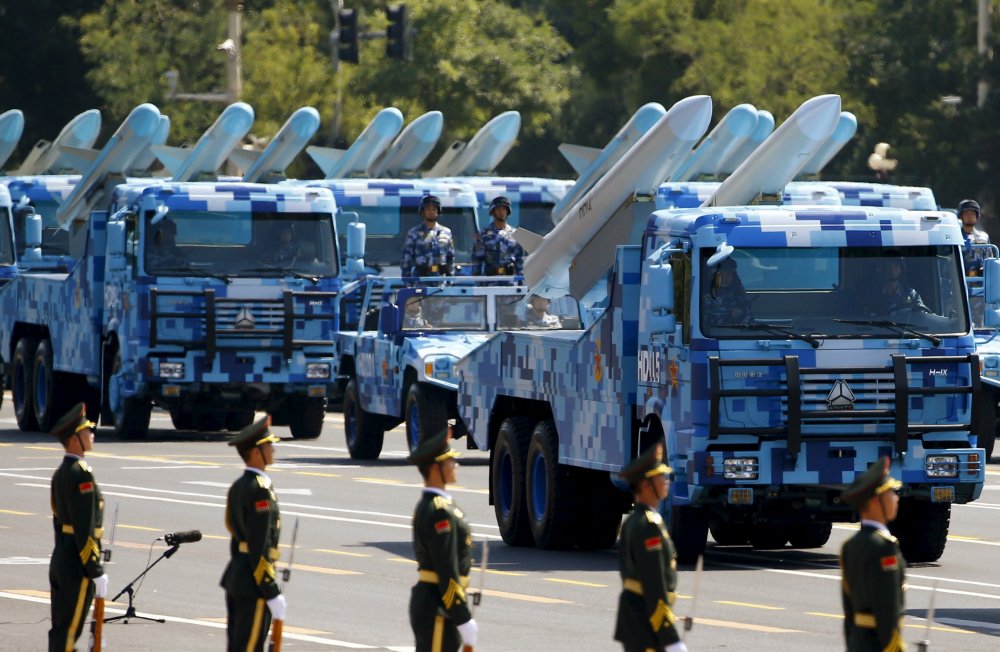 With the seventieth anniversary of the People’s Republic of China (PRC) just around the corner, experts following the evolution of the Chinese military are on the edge of their chairs. What new and shiny toys will be unveiled? After all, it was only four years ago that the People’s Liberation Army (PLA) sent a shock through the community of American strategists by publicly revealing two different anti-ship ballistic missiles (ASBMs), DF-21D and also the longer-range DF-26. That moment might go down in history as one in which the lopsided Asia-Pacific military balance was suddenly altered.

Will there be another such moment and one in which the “balance” is further overturned? There is already speculation that China may display its new mobile ICBM, the DF-41. That is a weapon, after all, that is said to be capable of reaching all American states, except lucky Florida. Another possible candidate for Beijing’s spectacle would be the much-anticipated Chinese stealth bomber. One Chinese strategist recently claimed that this would be China’s answer to the possible deployment by Washington of myriad intermediate range missiles around the “first island chain.” It would be especially interesting to see if Beijing is indeed going in for either its own VSTOL jet fighter, which has been dubbed J-18, or even a type of Chinese tilt-rotor equivalent of the Osprey transport.

However, it is important to once again emphasize that the naval balance is impacted by vessels that may lack dramatic flair. Indeed, “tin cans” or small to medium surface combatants remain the workhorse for almost all navies. The same is true for naval aviation, where a seeming ugly duckling can sometimes turn out to be more important than some sleek interceptors. For instance, during World War II, the U.S. Navy’s PBY-6A Catalina flying boats were an example of such units. In this case, a rather unsightly, but still significant “duckling” has appeared in the June 2019 edition of the Chinese naval magazine Shipborne Weapons [舰载武器]. To be more precise, the magazine actually reveals quite-detailed graphic designs for three distinct, new carrier-borne aircraft. They are all propeller-driven and appear to be variants of the same basic design. The first is labeled as a “ship-borne transport type [舰载运输性],” the second is called a “ship-borne anti-submarine type [舰载反潜性]” and the third, the “air warning-600 [空警-600]” variant is highlighted in that particular magazine issue.

The latter may well represent the highest priority of the three, while the first may be the least technologically challenging. No less than twenty pages of description follow in this particular edition of Shipborne Weapons regarding KJ-600 and that important plane was analyzed in some detail in Popular Science back in 2017. Here, it can simply be noted that KJ-200 is said to compare to the U.S. Navy’s equivalent, the E-2 Hawkeye. Shipborne Weapons states: “In its airframe dimensions and propulsion design it is basically similar to the E-2C … but it’s radar capabilities and avionics will be better [他在机体尺寸和气动设计与E-2C基本类似 … 但在雷达性能和航电技术水平上将更为优异 ].” To be sure, KJ-600 will fill in a major gap for the overall capabilities of a Chinese aircraft carrier group. However, that is not the big news here.

Rather, it’s the second “duckling”—also a mid-size carrier-borne propeller-driven aircraft that amounts to a sort of revelation. This design is a close cousin of KJ-200 and features chin-mounted search radar, a dispenser with fifty sonobuoys, light-weight anti-submarine-warfare (ASW) torpedoes, and also a protruding rear magnetometer. The caption on the graphic notably does not say this aircraft is in “in development [正在研制],” but rather that it “is a possibility [可能会出].” Still, one must evaluate this projection as rather credible given the seemingly correct assessment in the caption here that explains the Chinese aircraft carrier “will confront an extreme threat from submarines.” Moreover, it is argued that such fixed-wing carrier-based ASW aircraft would be far more efficient in defending the battle group than the equivalent number of ASW helicopters. The appearance of this design, not only confirms that the PLA Navy has grand blue water ambitions for deploying its new carrier battle groups, but also implies a determination (amply evident from other indicators as well) to contest for undersea superiority. Indeed, if the PLA Navy does field a carrier-based ASW aircraft, that would be a capability that the U.S. Navy currently lacks, since the S-3 Viking was retired some years ago.

However, the revelation that the PLA Navy may be looking at deploying a carrier-based, ASW optimized, fixed wing aircraft is not the only important insight from the recent pages of Shipborne Weapons. One issue prior (May 2019) actually has a rather detailed story on Beijing’s next generation of hospital ships. Given the recent activities of the PLA Navy’s current Type 920, which has sortied regularly to such distant locations as the East Africa and the Caribbean—each more than once—it is not a surprise that China is looking to upgrade and expand in this area.

The new design seems to be substantially different than the Type 920 and somewhat smaller, but it is still labeled as “new type large tonnage hospital ships [新型大吨位医院船].” The most pronounced difference seems to be the larger after deck, giving this new hospital ship use of a “super-large helicopter platform [超大直升机平台].” Both the large Z-8 and also the new type Z-20 will apparently deploy from this ship. Accommodating two helicopters working simultaneously will give this ship, according to the author, a much enhanced role in search and rescue. Most startling in this article is the assertion that China’s new hospital ship is already in sea trials and the second of this class has already had the keel laid. Thus, it is explained that each of China’s three fleets will have its own large, purpose-built hospital ship. To state the obvious, it’s both remarkable and encouraging that China has opted to put a decent sum of its defense resources toward hospital ships. Some peevish cynics will say, to be sure, this just reflects China’s image problem and is simply an investment in its propaganda apparatus.

A less biased and ideological appraisal, however, yields that these ships are generally a net positive for humanitarian disaster response, public health, and global security more broadly. Taking a rather more cosmopolitan perspective, one may surmise that many, if not most, of China’s achievements in providing “public goods” to the world have been serially ignored by the Western press and especially Western strategists. An abbreviated accounting of these “public goods” would certainly include: UN peacekeeping, demining, anti-piracy patrols, actions against ISIS, the transfer of an early warning aircraft to Pakistan to prevent inadvertent nuclear war, as well as strenuous efforts to combat Ebola and supporting the creation of an African Center for Disease Control (CDC). China has also made vital progress on reducing carbon emissions and additionally made critical contributions to the on-going proliferation crises with both Iran and especially North Korea. Then, there are the impressive infrastructure projects underway all over the world. One may decry certain environmental aspects of these projects, but there is no denying that Pakistanis appreciate more reliable electricity supplies and that Africans are appreciating a slew of new road, rail and port projects. Thus, the PLA Navy’s fondness for hospital ships is actually part of a pattern that illustrates Beijing’s generally constructive, cooperative demeanor in the international domain.

Why highlight China’s growing hospital ship program and its improving ASW capabilities in the very same article? This is done here in order to illustrate two simultaneous, if somewhat contradictory, trends in China’s rising power: Beijing’s apparently improving military capabilities, but also the Middle Kingdom’s steadily increasing abilities to render assistance to the world community in critical international situations. To highlight only one of these trends and not the other is to fall into what Harvard Professor Iain Johnston calls “selecting on the dependent variable”—a mistake reflecting preconceived biases that is all too common in contemporary Western analyses of China. Moreover, it is quite obvious that the PLA Navy is boosting its anti-submarine capabilities in response to a clear threat to its own naval forces. To be sure, ASW can also be an offensive weapon, but this author is surely not alone in speculating on just how many U.S. and allied submarines are stalking Chinese aircraft carriers at any given time; more than a couple, one guesses.

China can and should do much more on the world stage. It would indeed be astonishing and impressive if Beijing were to suddenly open its gates to the limited migration of refugees fleeing armed conflict. In a related point, it would certainly be desirable to see a more robust Chinese approach to making peace in conflict zones, such as in the twin catastrophes of Myanmar and Syria. But as a work in progress, China can count many achievements or “public goods” [公共产品] already to its credit and these should indeed be noted. There are absolutely reasons to maintain vigilance. Hard questions need to be asked of Beijing with respect to the treatment of its own minorities (and they may want to ask American interlocutors some tough questions regarding the fate of minorities in the United States too). But ultimately, an objective appraisal of China’s diplomacy and defense must nevertheless conclude, at this point, that the overwhelming majority of Western think tanks and press accounts are vastly exaggerating the threat, including the naval threat in particular, that China poses to U.S. national security.