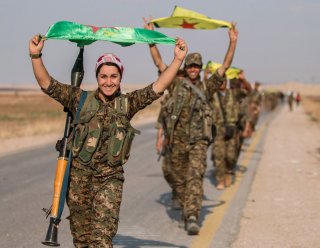 The FBI had a question for Jêhat’s mother. They wanted to know if her son was trying to join an Islamist group.

Three years later, the Department of Homeland Security was worried about Brace Belden. Officials said that the “minor criminal and drug addict who started reading Marx and Lenin in drug rehabilitation” was part of a “nexus” between Antifa activists and the Syrian Civil War.

Jêhat and Belden were both American fighters in the same U.S.-backed, Kurdish-led force in Syria.

Dozens, if not hundreds, of Americans have joined the People’s Defense Units (YPG) and its successor, the Syrian Democratic Forces, as volunteers in the fight against ISIS. And the Department of Homeland Security has struggled to make sense of these foreign fighters, often attempting to tie them to the terrorist threat of the day, leaked documents show.

“It’s not terribly surprising” that authorities were collecting this information, said Jason Fritz, a Johns Hopkins University lecturer who has researched foreign fighters in the YPG. “Anybody that mobilizes to fight in a war they don’t have to, gets combat experience, there’s probably some concerns.”

But Fritz hasn’t “seen any cases of [YPG volunteers] being any kind of security threat” over the past six years of the Syrian Civil War, “particularly the leftists.”

The YPG first gained prominence in the summer of 2014, when the left-wing rebel group was fighting a desperate battle against ISIS, now known as Islamic State. YPG guerrillas successfully turned the tide in Syria and even intervened in neighboring Iraq to prevent a genocide against the Yezidi people.

The group ended up taking in scores of volunteers from the West, both right-wing militants who want to “defend Western civilization” and left-wing militants who thought “here are some people I agree with, they’re getting massacred, maybe I can help,” according to Fritz.

Homeland security officials first took note of these volunteers in early 2015, an August 2015 field analysis report obtained by the National Interest from the BlueLeaks archive shows.

It was legal, albeit discouraged, for Americans to join the YPG. Although the U.S. government considered the closely-aligned Kurdistan Workers Party to be a terrorist group, it was backing the YPG with weapons and advisors.

But authorities were alarmed by veterans and active-duty service members who wanted to join the fight against ISIS.

U.S. Army veteran Jordan Matson had grabbed headlines with the “Lions of Rojava,” an online network he created to recruit Americans to fight for the YPG, and it seemed that many veterans were interested.

One active-duty Ohio National Guard member even “inquired with his chain of command about transferring his status” in order to travel to Syria, according to the field analysis report.

Homeland security officials’ biggest worry was that some of these American volunteers might actually be trying to join ISIS.

Analysts with Homeland Security Intelligence and Analysis assessed that “homegrown violent extremists (HVE) intent on traveling overseas—in support of [ISIS] or other Syria-based violent extremist groups—potentially could seek to circumvent U.S. law enforcement and travel restrictions by masking their true intentions and using the ‘Lions of Rojava’s’ [sic] facilitation network.”

The analysts did make it clear that they had “no information” about ISIS fighters actually using this route, but said it was an “additional pathway” to get into Iraq and Syria.

Robert Rênas Amos, an American who joined the YPG in early 2015, says that it would have been logistically difficult to join ISIS from within YPG-held territory.

“I could understand that people who were not educated on the particulars of the situation could come to that conclusion,” he told the National Interest, but “everybody knows, if they had [passport] stamps with Turkey, they could have been in ISIS, if not, they probably didn’t, because that’s the only way in.”

Indeed, ISIS had a well-established route for foreign fighters through the Turkish border. Foreigners who wished to join the YPG, on the other hand, would have to travel through Iraqi Kurdistan.

Nevertheless, U.S. authorities continued to act as if the YPG fighters were potential members of ISIS.

An American foreign fighter who would only be identified by his Kurdish codename Jêhat said that FBI agents visited his family’s home in 2017 while he was in Syria, “supposedly [because] my passport was scanned entering Iraq but not exiting.”

“They asked them if I’d ‘expressed any interest in Islam’ [a]t which point my mom was like, ‘no the opposite,’” he wrote in an encrypted text message. “Frankly I’m unsure if they’re truly so incompetent, or if my opsec [operational security] was just really on point, or if they knew enough and it was a feint to get more info.”

Brace Belden, another American volunteer in the YPG, confirmed that some of his comrades-in-arms “had like 8 hour interrogations” by either the FBI or the Department of Homeland Security “[w]here it was implied that they were in ISIS.”

Belden now hosts the podcast TrueAnon, a talk show dedicated to investigating sex trafficking conspiracies by elites. But he says he has been interrogated by U.S. law enforcement every time he flies internationally and on some domestic flights as well.

“They did ask about Isis [sic] slightly but mostly PKK/YPG,” he wrote in an encrypted text message, using the Kurdish acronym for the Kurdistan Workers Party. “They kept pressing me for troop strength which isn’t generally something the equivalent of a grunt ever knows about in any war.”

President Donald Trump wanted to crack down on “ANTIFA,” a vaguely-defined movement of militant left-wing “anti-fascist” protesters, in the wake of civil unrest around the police killing of George Floyd.

“The United States of America will be designating ANTIFA as a Terrorist Organization,” he declared on Twitter on May 30.

There was one problem: only foreign groups can be designated as “terrorist organizations” under U.S. counterterrorism laws.

Turkey, which is opposed to the YPG and Syrian Democratic Forces, tried to provide a solution.

The Turkish government began to release supposed evidence that Antifa militants were “trained” by the YPG. Turkish President Recep Tayyip Erdoğan even personally called Trump to tell him of this theory.

Syrian Kurdish diplomat Sinam Mohamad told the National Interest at the time that YPG volunteers were in Syria “to fight the fascists of the terrorist group ISIS,” not “any other state.” She added that the Syrian Democratic Forces had no interest in interfering in America’s “internal” affairs.

The Trump administration had found its hook, and the Department of Homeland Security began to compile dossiers on returning YPG fighters, according to an intelligence report obtained by Ken Klippenstein of The Nation.

The report stated that there was “a clear connection in imagery between ANTIFA ideology and Kurdish democratic federalism teachings [sic] and ideology.”

It disparagingly refereed to Belden, who has been open about his struggles with substance abuse, as a “drug addict.”

The report also stated that an “unidentified Colorado-based individual who was in Northern Syria...posted an announcement to a popular anarchist extremist website seeking funds to return to the United States” in October 2017.

Any unused money from the fundraising campaign “would be ‘funneled’ to Kurdish solidarity or ANTIFA efforts,” according to the report.

A former YPG fighter who fits the description in the report spoke to the National Interest on condition of anonymity, citing legal concerns.

The former fighter said he had been trapped in neighboring Iraqi Kurdistan when a political crisis shut down the region’s main airport. He eventually escaped to Baghdad International Airport in a 250-mile taxi ride, paid for with money he raised online.

None of the money was ever “funneled” to ANTIFA, the former fighter claimed, because he had to spend the rest of it on a plane ticket home from Iraqi’s capital.

“Landed in Qatar or [whatever] with like 10k Iraqi dinar [$8.40] in my pocket,” the former fighter wrote in an encrypted text message.

He added that ANTIFA is a “political idea,” not a group that could “receive material aid like a political organization or army can receive,” denouncing the “obviously unconstitutional witch hunt” by “one of the most strategically backwards and incompetent administrations in history.”

European countries have criminalized fighting for the YPG as well as prosecuted the people who have financed them.

But the United States is much more unlikely to do so.

For one, the Trump administration has been trumpeting its supposed “deal” with the Syrian Democratic Forces to extract Syrian oil, making it unlikely that the administration would turn around and declare Syrian Kurdish militants to be terrorists.

And the United States is unlikely to pass laws against fighting in foreign forces in general, as it approves of its citizens volunteering in the Israeli military, Fritz explained.

Instead, the Department of Homeland Security seems more focused on the message it can send with its search for terrorists in the YPG’s ranks.

“It’s mostly to highlight that there are leftists who have gone and done something that most of the population considers ‘extreme,’” Fritz said.