Could This Congresswoman Be the Democrats’ First Black Foreign Policy Head? 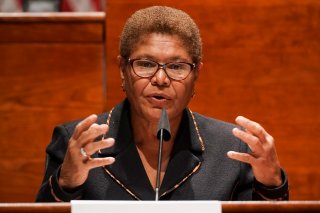 Congresswoman Karen Bass is in high demand these days.

The California Democrat is being vetted to serve as presidential candidate Joe Biden’s running mate, according to multiple reports published on Wednesday. The same day, progressives began to push Bass as a candidate for House Foreign Affairs Committee chairwoman.

Bass, currently chairwoman of the Congressional Black Caucus, would be the first African-American and second woman ever to lead Congress’s foreign policy shop.

She would also be riding on an unprecedented wave of grassroots pressure for a more restrained U.S. role in the world. Progressives, feeling vindicated by recent primary victories, are getting ready to use their leverage to push the Democrats left on foreign policy, especially as the House Foreign Affairs Committee leadership has just opened up.

Several staffers at progressive organizations said that Bass would be their favored candidate to lead the Committee.

Current committee chairman Eliot Engel (D–N.Y.) is on the way out. He was bumped off the 2020 ballot by local middle school principal Jamaal Bowman in a Democratic primary election earlier this week, leaving the Committee’s leadership in question after this year’s elections.

The race was also a debate on foreign policy, rare for a local primary election.

Bowman had talked about conditioning U.S. aid to Israel over human rights, which alarmed Democrats concerned with maintaining current U.S. relationships in the Middle East. A group called Democratic Majority for Israel PAC spent over $2 million campaigning for Engel.

Bowman’s supporters went on the offensive. They painted Engel as a hawk who has undermined progressive foreign policy, whether by voting for the Iraq War in 2003, opposing President Barack Obama’s nuclear deal with Iran in 2015, or supporting arms sales to Saudi Arabia.

“I'm excited that each of these progressive victories adds another champion in Congress against endless wars,” added Campos-Palma, who founded Vets for the People, a veterans’ group in the Working Families Party that helped campaign for Bowman.

Engel’s stance on the Iran deal also bought Bowman support from Democrats closer to the center, including some former Obama administration officials.

“Bowman's upset should rankle current hawkish HFAC members vying for the top job and party leadership who rewarded these past positions rather than treating them as disqualifying,” said Erica Fein, advocacy director at Win Without War.

Engel’s defeat could also be a chance for progressives to directly take control of the committee he once ran.

Committee leadership traditionally goes in order of seniority—members who have served longer get the first bite at the apple—but the Democratic Party’s rules allow other members to skip the line if they have enough votes from the Democratic caucus.

“The next several people in order of seniority are all historically pretty hawkish in terms of foreign policy,” said former congressman David Segal, executive director at Demand Progress. “They’re people who have been around for twenty or thirty years, and have the politics of twenty or thirty years ago.”

Rep. Brad Sherman (D–Calif.) is next in line. Engel had actually achieved his current position by challenging Sherman in 2018—and other members could try to hop the line again.

The National Interest spoke to several staffers at progressive organizations, some of them on condition of anonymity, about their views on the leadership race.

All of them emphasized that the situation is still fluid at this early time, but several said that their organizations would like to see Bass take over.

“[O]ur organization and the entire left would support Bass over any of the more senior members of the committee,” wrote Erik Sperling, executive director at Just Foreign Policy, in a text message. “[E]very single progressive group [I] have talked to (probably a dozen) have said they would prefer [B]ass of all the senior members of HFAC.”

These groups, he emphasized, have not “had the chance to have the meeting to fully decide on the strategy yet.”

Sperling later clarified to the National Interest that progressives would be “open to Meeks and Connolly.”

Segal stopped short of endorsing any candidate, but said that Bass is someone “relatively senior on the Committee who has politics more in line with a majority” of Democrats.

Bass has staked out anti-interventionist positions, especially when it comes to the Middle East.

She publicly supported the Iran deal. Bass has also called the rise of ISIS “the result of years of mistakes” in Iraq, including the 2003 invasion. And she has denounced the Trump administration’s policy in Syria as a combination of “sporadic bombings” and “fake timetables” for withdrawal.

Party leadership may have a hard time opposing Bass.

Her ten years in Congress, position at the head of the Congressional Black Caucus, and vetting by the Biden campaign give Bass “an increasing amount of gravitas,” according to Segal.

There is one problem: it is far from certain whether she actually wants the job.

Bass has not made any public announcements about the Committee leadership, and her office has not responded to a request for comment as of press time.

Progressives’ second choice after Bass is unclear. It is more clear who their last choice would be.

“I haven’t heard anything about who progressives want as HFAC chair but rather who they do not want,” a staffer for a progressive member of Congress told the National Interest on condition of anonymity. “Don’t want Sherman or Deutch obviously.”

Another three staffers at progressive organizations said that Deutch would be a red line for progressives.

One of the staffers called Deutch “another Engel.” The staffer highlighted Deutch’s opposition to the 2015 deal with Iran.

Deutch’s office has not responded to a request for comment as of press time.

The deal lifted U.S. economic sanctions on Iran in exchange for limits on the Iranian nuclear program. President Donald Trump has since left the deal and replaced it with a campaign of “maximum pressure.”

Deutch, Sherman, and Sires all opposed the Iran deal. Meeks and Connolly supported it.

Engel claimed at the time that the deal would “strengthen Iran’s position as a destabilizing and destructive influence across the Middle East,” although he also opposed Trump’s decision to leave it.

Ryan Costello, policy director at the National Iranian American Council, said that there is “no better test of whether a legislator can cut through disinformation and take a stand for U.S. interests under strong political pressure” than support for the Iran deal.

“Critically, Biden has said he will rejoin the deal, as well,” Costello added, although he did not mention anyone by name. “Why nominate someone who may try to frustrate a restoration of the agreement in 2021, increasing the risk of Biden inheriting Trump’s failed Iran approach and a full-blown nuclear crisis?”

No matter who eventually takes over the Committee, they will have to deal with a party that has shifted left on foreign policy.

“The defeat of Engel was a referendum on the bipartisan hawkishness of the center, and voters roundly and explicitly rejected it,” McCoy said. “And, speaking as a veterans organization that endorsed Jamaal Bowman, if the next chairman fails to represent the consensus of voters, we’ll primary them too.”

This article has been updated with a follow-up quote from Erik Sperling.