Could Coronavirus Kill American Hostages In the Middle East? 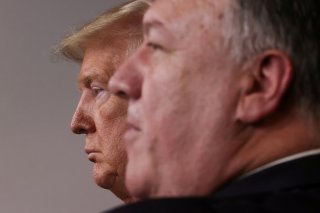 The Trump administration renewed its call for Syria to release unjustly detained Americans on Wednesday morning, as the novel coronavirus disease (COVID-19) threatens to overwhelm healthcare systems across the Middle East.

The U.S. State Department is calling on unfriendly governments to release “wrongfully detained” Americans on humanitarian grounds amid the coronavirus pandemic. Lebanon has so far freed an American citizen on trial and Iran has furloughed an American convict. But several Americans remain disappeared or behind bars in Iran and Syria.

State Department spokeswoman Morgan Ortagus asked Syria to release wrongfully detained Americans, noting that the country’s prison “conditions are prime for the quick spread of the virus which would have devastating impacts on vulnerable detainees who are already in poor health after months or even years of torture, malnutrition, and lack of access to medical care.”

President Donald Trump had called for Syria to release Austin Tice, a journalist whose whereabouts have been unknown to the public since his 2012 disappearance from Syria, at a coronavirus briefing last week.

“Syria, please work with us, and we would appreciate you letting him out,” he said. “We’ve done a lot for Syria and we have to see if they’re going to do this. It would be very much appreciated if they let Austin Tice out immediately.”

Majd Kamalmaz, an American psychotherapist held by the Syrian government, was moved from a prison to an undisclosed location last week, according to his family.

Secretary of State Mike Pompeo has also called on Iran to release American prisoners, even suggesting that governments could use humanitarian relief as leverage to secure the fate of their citizens held by the Iranian government.

Iran furloughed 85,000 prisoners last week as COVID-19 spread throughout the country. One of them was Michael White, a U.S. Navy veteran sentenced to ten years in 2018 for insulting Iran’s leaders.

“Right now, it’s just a medical furlough. I did speak to Michael White right after he was released, had a very good conversation,” Brian Hook, the State Department official overseeing Iranian affairs, told reporters on March 19. “He’s in very good spirits. But he has some predicting health conditions that are going to require some attention.”

A U.S. helicopter also picked up American citizen Amer Fakhoury, a late-stage cancer patient, after a military court in Lebanon acquitted him last week, citing a statute of limitations.

Fakhoury had been accused of overseeing torture at Khiam Prison, an infamous detention center run by a pro-Israel militia during the Lebanese Civil War, before emigrating to America. Sen. Jeanne Shaheen (D–N.H.) and Sen. Ted Cruz (R-Texas) had pressured Lebanon to release Fakhoury.

Assistant Secretary of State David Schenker also insisted that Fakhoury’s detention had been “a political football from day one” at the March 19 press conference. But he had the opposite opinion on Fakhoury’s guilt.

“There have been many dozens of Lebanese affiliated with Khiam Prison who had been convicted of torture and other crimes,” he said. “Fakhoury’s name has never been mentioned in regard to any of those allegations and he was never charged for that.”