Donald Trump's Iran Point-Man Has a Message For Biden: Iran Is Biggest Threat 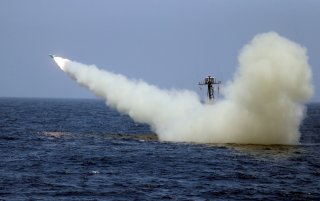 Special Representative Brian Hook warned that the next U.S. administration should understand that Iran is the “biggest threat” in the Middle East, and said that countering Iranian influence is a “bipartisan issue.”

Hook, who will be leaving the State Department next week, has overseen the Trump administration’s “maximum pressure” campaign against Iran since September 2018. The future of the campaign could soon be in jeopardy, especially if Democratic candidate Joe Biden wins November’s presidential election.

Former ambassador Mark Wallace asked Hook if he had a message for Biden advisor Jake Sullivan at a video conference event hosted by United Against Nuclear Iran.

“The first thing I’d say to Jake is that we’re hopeful about a second term,” Hook responded.

“The biggest threat that our allies and partners in the region face is not the Palestinian-Israeli conflict,” he added. “It’s Iran. You’ve got to start there.”

Sullivan has signalled that Biden will return to the 2015 nuclear deal with Iran—which the Trump administration broke from in May 2018—and will “not hold hostage nuclear diplomacy for the sake of regional diplomacy.”

But Hook claimed that regional diplomacy, including the recent deal between Israel and the United Arab Emirates, would not have been possible without carrying out a pressure campaign against Iran.

“It would have been impossible to broker a peace agreement with UAE and Israel if they feel like you’ve betrayed them with the wrong Iran strategy,” he said. “There’s just no trust there.”

Hook claimed that countering Iran should be a “bipartisan issue.”

It was unclear whether Sullivan was in the audience of Tuesday’s event. The Biden campaign did not immediately respond to a request for comment.

Hook was not the only figure at Tuesday’s event to call for Democrats to get on board with the Trump administration’s Middle East policy.

“After the election, we have to figure out how to deal with Iran,” said Nikki Haley, who served as the Trump administration’s ambassador to the United Nations from 2017 to 2018. “We can actually make Iran even weaker.”

She pointed out that many Democrats were originally opposed to the 2015 nuclear deal with Iran.

Former Democratic presidential candidate and United Against Nuclear Iran chairman Joe Lieberman said that it would be a “massive strategic mistake” to return to the 2015 deal with Iran “out of loyalty to [former President Barack] Obama.”

Instead, he claimed that Iran should be “allowed to collapse just as the Soviet Union was.”

“I’m optimistic that this regime in Tehran will collapse,” Lieberman said. “It’s not Barack Obama’s Middle East any more.”