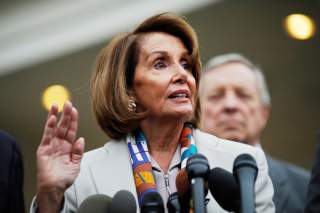 The Democrats have now assumed majority control of the House of Representatives for the first time in eight years. And with more power comes more responsibility. There is no issue on Washington’s national security agenda that will require as much responsible behavior, prudence and patience as the fragile U.S.-North Korea negotiations on denuclearization. House Democrats will need to resist the impulse to make this already vexing problem more unmanageable by trying to score cheap political points by making more unrealistic demands on the North Koreans. If the opportunity arises, they should support limited sanctions relief for North Korea and give the president’s team as wide a berth as possible to negotiate.

After years in the minority, Democratic lawmakers are ready to fight a president they despise—and the slew of investigations coming down on the president’s head will provide plenty of opportunities to hold him accountable. But the ongoing U.S.-North Korea dialogue should not become a political football in this battle. Indeed, one wrong move by Democrats in the House—putting more unrealistic demands on the table or introducing new sanctions legislation—could jeopardize a negotiation already on shaky ground.

We have seen this movie before and it ended badly. When the Obama administration was knee-deep in nuclear diplomacy with Iran, congressional Republicans used their power not to assist the president’s negotiating team but rather to shut the process down. Before the ink was even dry on the interim Joint Plan of Action, Sen. Marco Rubio pledged to pass new economic sanctions against Tehran, which would have pulled the rug from underneath America’s own diplomats. Months later, during a particularly sensitive time in the talks, forty-seven Senate Republicans sent a letter to Iran’s Supreme Leader Ayatollah Ali Khamenei essentially daring him to walk away. The act was widely ridiculed as a political stunt which could have very well destroyed one of the most important arms control negotiations since the end of the Cold War.

With their newfound power on Capitol Hill, some Democrats will try to leverage the U.S.-North Korea talks to score political points. Senior Democratic lawmakers have already signaled that this may be their intent. After the conclusion of last June’s Singapore summit between Donald Trump and North Korean leader Kim Jong-un, House Speaker Nancy Pelosi dismissed the meeting as a farce and a charade. “In his haste to reach an agreement,” Pelosi wrote “President Trump elevated North Korea to the level of the United States while preserving the regime’s status quo.” Senate Minority Leader Chuck Schumer joined the chorus; speaking on the Senate floor, he called the first-ever handshake between a U.S. and North Korea head-of-state “pomp and circumstance” for the cameras. In Schumer’s own words, “What President Trump achieved on behalf of the United States is unclear and difficult to certify; what Chairman Kim achieved for North Korea is tangible, and lasting.”

To be fair, Democrats are not the only ones with objections and concerns. And some of these, such as the lack of specificity in the Singapore summit statement, are indeed legitimate. The administration’s zigs and zags on North Korea policy leave much to be desired, as does the absence of a coherent strategy and realistic game plan for achieving U.S. objectives. Hawkish Republicans are just as nervous about Trump’s North Korea strategy. Sen. Lindsey Graham openly confided that he was afraid Trump was being taken for a ride.

It is the Democrats, however, who have far more of an incentive to use the North Korea issue for political fodder. This would be a big mistake. The party can exercise strong and responsible oversight of the administration’s North Korea policy without pushing for completely unrealistic concessions from Pyongyang or letting their visceral hatred of Trump hamper the chances for peace on the Korean Peninsula. Diplomacy with a stubborn and paranoid regime is hard enough. It’s infinitely harder when senior administration officials have to spend much of their bandwidth to keep North Korea policy from being treated like a Washington piñata.

At some point in the denuclearization negotiations the administration might seek congressional support for limited sanctions relief in return for commensurate North Korean concessions. House Democrats should grant their approval, especially for such progressive causes as expanding humanitarian operations in North Korea and facilitating cooperative cross-border projects that would increase wages and the standard of living for impoverished North Korean workers.

Both these steps, as well as restrained rhetoric, would help to advance both U.S.-North Korea negotiations on denuclearization and the inter-Korean reconciliation and normalization process, which offers the best prospects in years for eliminating the risk of war on the peninsula and achieving an enduring peace. Moreover, they are steps that could be easily reversed if these talks collapse or if North Korea walks away from the table and returns to the belligerence that defined its conduct before the U.S.-North Korea dialogue began.

House Democrats have much bigger fish to fry with the president than North Korea. It is in their political interests to show the American people that they—and by extension, the U.S. Congress as a co-equal branch of government—can an act in a bipartisan manner when the national security of the United States is at stake. Now is not the time to weaponize for narrow partisan advantage a negotiation that could achieve historical results.

Daniel R. DePetris is a regular contributor for the National Interest and a columnist at the Washington Examiner.

Richard Sokolsky is a senior fellow at the Carnegie Endowment for International Peace and a former member of the Secretary of State's Office of Policy Planning.