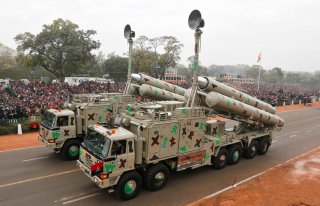 While the international spotlight was shining squarely on Russia’s invasion of Ukraine last month, an accidental but significant missile launch in South Asia provided another potent reminder of how we could stumble into nuclear warfare by mistake.

On March 9, 2022, India accidentally launched a BrahMos cruise missile into Pakistan with the Indian government later issuing a statement calling it the result of a technical malfunction during a routine maintenance and inspection of its missiles. While the missile was unarmed and there were no reported casualties, this accidental missile launch from one nuclear-armed state into another nuclear-armed state raises questions over how luck and institutional failures impact the way countries are able—or, more critically, unable—to control escalation.

Matt Korda joined Ploughshares Fund’s podcast, Press the Button, to discuss this accidental missile launch in South Asia with co-host Tom Collina. Korda is a Senior Research Associate and Project Manager of the Nuclear Information Project at the Federation of American Scientists. In his conversation with Collina, Korda breaks down what led to the incident and its implications for crisis stability between India and Pakistan.

According to Indian defense sources, a series of software and mechanical locks would need to be bypassed to initiate the missile launch countdown. Korda explained that while it was unknown whether the launch was the result of human or technical error, it was “clear that the missile was never supposed to have actually been fired.” However, once it was fired, there was no possible way to abort the launch since the BrahMos missile has no self-destruct system in place — unlike India’s nuclear-capable missiles.

As damage was limited to civilian property, Korda expressed his concern that the situation could have turned out much worse than it did, especially as it appeared that Pakistan inaccurately tracked the BrahMos missile. In a March 10 press conference, Pakistani officials misidentified the launch point and a few aspects of the missile’s trajectory. Indian officials later stated that the flight map released by Pakistan was inaccurate. Korda’s concern is not unfounded; Pakistani officials confirmed that they took tactical actions in response to the missile launch even after it was likely certain that the launch was accidental and there would be no further action.

Korda said that these errors and actions have significant implications for crisis stability since “in a different context, Pakistan could miscalculate or misunderstand the missile’s target and be pushed towards rapid retaliation.” Korda specifically cited Pakistan’s 2019 activation of the country’s National Command Authority, the organization which directs Pakistan’s nuclear arsenal. Korda called this a “clear piece of nuclear signaling” intended for India and compared the move to Putin’s recent placing of Russian nuclear forces on a heightened state of alert.

Additionally, crisis stability between India and Pakistan was further hampered by miscommunication. Pakistan officials stated that India did not make use of the high-level military hotlines to alert or communicate that there was an accidental launch. Furthermore, India waited two days after the accidental launch to issue a public statement.

This situation between India and Pakistan, Korda argued, “illuminate[s] some pretty dangerous dynamics that can come into play when we think about crisis escalation between nuclear-armed states.” He points specifically to India and Pakistan’s history of conflict, noting that this situation could have had a different and deadlier outcome if the two countries had been experiencing high tensions. Korda also gives a reminder of India’s tendency in recent years to place their rockets on a heightened level of readiness, prompting Pakistan to increase the readiness of its missiles in turn—a dangerous game of escalation for two nuclear-armed states to play. Thus, Korda believes that luck “absolutely does play a role in preventing crises from escalating further,” though it’s not something we should rely on, especially in the context of nuclear weapons.

“The big takeaway here,” Korda concluded, “is that we can't expect that nuclear deterrence will always function exactly as how we predict and doing so risks overconfidence in our own ability to control escalation.”

You can find the full interview with Matt Korda at Press the Button. His report on the incident, Flying Under the Radar: A Missile Accidental in South Asia, is available here.

Jacqueline Hsing is the Communications and Marketing Specialist at Ploughshares Fund.