Mike Pompeo: We Consider Venezuela’s Next Election a Sham 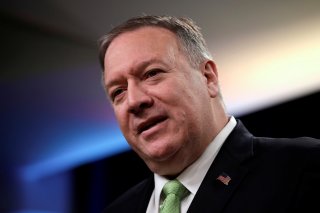 U.S. Secretary of State Mike Pompeo said that “elections that represent the will of the people are impossible” in Venezuela after the country’s opposition vowed not to “ratify or recognize” the next round of voting.

Venezuelan president Nicolás Maduro and his Supreme Court have “continued to manipulate the Venezuelan Constitution,” Pompeo claimed in a Monday statement.

Venezuela’s opposition-controlled National Assembly has not yet appointed a council to supervise the next parliamentary elections, which are set to occur before January 2021. So the Venezuelan Supreme Court appointed its own National Election Council on Friday, prompting the opposition to accuse the court of rigging the vote.

“We will not ratify or recognize any electoral farce mounted by the dictatorship for its own convenience, much less the results given by some so-called supervisors chosen at random by the dictator through his judicial Legion of Horror,” the opposition G-4 bloc announced in a Monday statement in Spanish.

Pompeo agreed in his own statement on the same day.

“The Venezuelan Constitution gives the democratically elected National Assembly the responsibility of electing the [Council] members,” he stated. “The regime has selected a [Council] that will rubber-stamp its decisions and ignore the conditions required for free elections.”

Maduro has been at odds with his country’s parliament since January 2019, when the National Assembly declared Maduro a “usurper” and named opposition leader Juan Guaidó as President. The opposition has pledged to extend the current National Assembly’s term past January 2021, keeping Guaidó in office no matter what happens in this year’s elections.

“We have to fight, united, with more strength than ever before, in order to achieve an emergency government that addresses the crisis, and this way see the rebirth of our country,” Guaidó wrote in a Spanish-language social media post on Sunday.

The Trump administration has made Maduro’s ouster a goal of U.S. policy as part of a broader push against Latin America’s “troika of tyranny.”

Pompeo had published a roadmap for a “negotiated transitional government” in January 2020.

The plan calls for appointing a new National Election Commission, lifting all bans on political parties, restoring freedom of speech, and seating a “newly constituted, fair and independent supreme court.”

Pompeo reiterated this plan in his Monday statement.

“Free elections are the path out of Venezuela’s deep political crisis,” Pompeo said in his Monday statement. “This step by the regime and its Supreme Court takes Venezuela even further away from a democratic transition.”