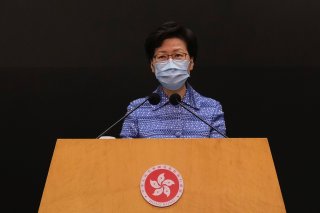 Secretary of State Mike Pompeo announced that Hong Kong no longer has a “high degree of autonomy from China,” beginning a process to end the city-state’s special trade relationship with the United States.

The Chinese government promised Hong Kong the ability to maintain its own government after peacefully taking back the former British colony in 1997. This policy of “One Country, Two Systems” has allowed the United States to maintain separate trade ties with Hong Kong and the rest of China.

But the Chinese central government in Beijing is now attempting to ram through a controversial national security law for Hong Kong—which has pushed the Trump administration to revoke the special U.S.-Hong Kong trade relationship.

“Beijing’s disastrous decision is only the latest in a series of actions that fundamentally undermine Hong Kong’s autonomy and freedoms and China’s own promises to the Hong Kong people,” Pompeo said in a Wednesday statement, citing older British-Chinese agreements. “No reasonable person can assert today that Hong Kong maintains a high degree of autonomy from China, given facts on the ground.”

Pompeo’s declaration could trigger the Hong Kong Policy Act, which would subject Hong Kong to the same tariffs and export controls as the rest of China. U.S.-China trade relations are currently taking a turn for the worse as competition between the two powers heats up.

David R. Stilwell, Assistant Secretary of State for East Asian and Pacific Affairs, told reporters at a Wednesday conference call that the decision is now up to President Donald Trump.

“The actions will be considered, and they will be as targeted as possible to change behavior. We’re not hopeful that Beijing will reverse itself, but that is one of the options,” Stilwell said. “It’s a whole-of-government approach, certainly an administration approach, and so I’m not going to forecast or limit what it could be, but there’s a very long list of things that the President could do in response.”

The Office of the U.S. Trade Representative estimates that U.S.-Hong Kong trade was worth $66.9 billion in 2018, making Hong Kong the tenth largest export market for U.S. goods.

The decision could further jeopardize Hong Kong’s status as a gateway to global markets. The city has suffered its worst economic contraction on record following months of political unrest and the coronavirus pandemic.

Beijing announced last week that it would impose a national security law on Hong Kong. Protests have broken out as the city’s government defends the proposal.

Hong Kong has seen widespread protests in March 2019, when millions of residents demonstrated against an extradition bill favored by Beijing. The opposition to the bill soon turned into a broad movement demanding more autonomy and democratic reforms for the city.

U.S. lawmakers have kept a close eye on the unrest, passing the Hong Kong Human Rights and Democracy Act in 2019. The law imposes economic sanctions on Chinese officials responsible for human rights violations.

Sens. Chris Van Hollen (D–Md.) and Pat Toomey (R–Penn.) proposed expanding the law even further by imposing sanctions on banks that do business with Chinese officials.

“Hong Kong and its dynamic, enterprising, and free people have flourished for decades as a bastion of liberty, and this decision gives me no pleasure. But sound policymaking requires a recognition of reality,” he said. “While the United States once hoped that free and prosperous Hong Kong would provide a model for authoritarian China, it is now clear that China is modeling Hong Kong after itself.”

This article has been updated to reflect comments later in the afternoon by Assistant Secretary of State for East Asian and Pacific Affairs David R. Stilwell.