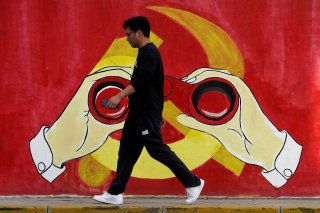 Sens. Chris Van Hollen (D-Md.) and Pat Toomey (R-Pa.) are pushing for a new bill that targets Chinese officials and banks in retaliation for Chinese moves against Hong Kong’s autonomy.

The Chinese government had promised Hong Kong the ability to rule itself under the “one country, two systems” policy when Britain handed the former colony back to China in 1997, but Beijing is now proposing a national security law as part of a crackdown on Hongkongers protesting for more autonomy.

The move could trigger sanctions under the Hong Kong Human Rights and Democracy Act, passed by U.S. Congress last year. Van Hollen and Toomey are proposing a bill to go even further, by targeting banks that do business with Chinese officials with economic sanctions.

“This is legislation we’ve been working on as we’ve watched China crack down on the autonomy of Hong Kong,” Van Hollen said on a Tuesday conference call. “This is designed to hit the Chinese Communist Party and the individuals involved in these decisions where it hurts.”

Toomey added during the call that the threat of sanctions alone could cause “business interests” to put pressure on the Chinese government once they “realize this is a tool that can be deployed.”

“My hope is that it will increase the likelihood that the worst potential behavior from Beijing is averted, for the sake of the people of Hong Kong,” he said.

Secretary of State Mike Pompeo said in a Friday statement that China’s proposed national security law “would be a death knell for the high degree of autonomy Beijing promised for Hong Kong.”

Hong Kong is allowed to have a special trade relationship with the United States under the Hong Kong Human Rights and Democracy Act—as long as the Department of State certifies that the city has enough autonomy to justify treating it separately from the rest of China.

Pompeo had earlier complained of a brawl between pro-Beijing and pro-autonomy lawmakers in Hong Kong’s parliament during a debate over a bill to ban disrespecting the Chinese national anthem.

“Actions like these make it more difficult to assess that Hong Kong remains highly autonomous from mainland China,” he told reporters last Wednesday. “We’re closely watching what’s going on there.”

U.S.-China tensions have heated up over the past few weeks, accelerated by the coronavirus pandemic.

Pompeo called the Chinese central government “hostile to free nations” during Wednesday’s press conference, and the White House released a policy document calling for a “competitive approach” in response to China’s rejection of American “goodwill.”

Congress and the State Department have also been pushing for Taiwan—an island that has ruled itself since 1950 but that Beijing considers a renegade Chinese province—to have informal diplomatic representation at the World Health Organization.

The Global Times, the English-language newspaper of China’s ruling Communist Party, warned on Tuesday that “the central government won't tolerate any act of secessionism, subversion, foreign interference and terrorism.”

Van Hollen and Toomey both emphasized that they want to avoid what Van Hollen called “a new Cold War” with China, and want to return to a beneficial trade relationship.

“I’m hoping that we’ll be able to resolve a number of these outstanding issues, because both countries will be better off with expanding trade rather than contracting trade, but in my view, it does require some change in Chinese behavior,” Toomey said.