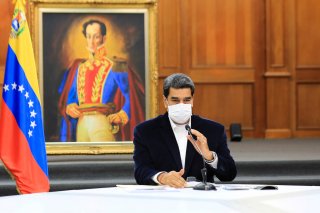 Secretary of State Mike Pompeo said that “there was no U.S. government direct involvement” in a failed attempt to overthrow Venezuelan president Nicolás Maduro by force earlier this week.

Venezuelan forces killed six and captured a few dozen armed men who launched a bizarre amphibious raid on a beach in northern Venezuela on Sunday. Maduro has accused the Trump administration of orchestrating the incident as part of an attempted coup d’etat.

Two of the prisoners appear to be U.S. Army veterans. An eccentric special forces veteran named Jordan Goudreau, who once served as private security for a Donald Trump campaign rally, claimed that his private security company Silvercorp was responsible for the attack.

“If we had been involved, it would have gone differently,” Pompeo said. “As for who bankrolled it, we’re not prepared to share any more information about what we know took place.”

He added that “we’ll use every tool that we have available” to secure the release of the American prisoners “if in fact these are Americans that are there.”

Goudreau claims that Venezuelan parliament leader Juan Guaidó had originally promised to finance the operation but failed to pay up, a claim that Guaidó denies.

A report by the Associated Press released a few days before the failed raid also suggests that Roen Kraft, heir to the Kraft Foods fortune, also played a role in bankrolling Goudreau.

The Trump administration had put a $55 million bounty on Maduro in late March after the U.S. Department of Justice indicted Maduro on drug trafficking charges.

Goudreau was encouraged by Maj. Gen. Cliver Alcalá, a Venezuelan military defector who has also been indicted for drug trafficking by U.S. authorities, according to the Associated Press.

The United States and several other countries do not consider Maduro to be the president of Venezuela. Instead, they recognize Guaidó, who was declared acting president by the Venezuelan parliament in January 2019 amidst a constitutional crisis.

Maduro, however, has continued to control most parts of the Venezuelan state, despite numerous uprisings and mutinies.

Venezuela is currently holding several other U.S. citizens, including the CITGO Six, a group of oil executives who worked for Venezuela’s state-run oil company.

The Trump administration has pursued an economic pressure campaign aimed at forcing Maduro to step down.

Elliot Abrams, the State Department official in charge of Venezuelan affairs, had laid out a “framework for a democratic transition” during a March 31 press briefing.

“It’s obvious that Maduro is going to resist any plan that calls for him to leave power,” he told reporters. “What’s important is the conversations that take place privately within the military and within the regime and within the party and within Venezuela, in labor unions, in the business community.”