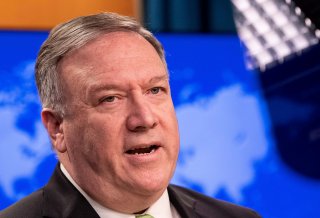 U.S. Secretary of State Mike Pompeo said that the United States will “push back” against the “corrupt” International Criminal Court in the coming days.

Pompeo has slammed the international tribunal over its inquiries into U.S. actions in Afghanistan and Israeli actions in the Palestinian territories. His Monday comments, on a podcast hosted by the right-leaning American Enterprise Institute, hinted that the United States could retaliate soon.

“You’ll see in the coming days a series of announcements not just from the State Department, from all across the United States government, that attempt to push back against what the ICC is up to,” he said. “I think that the ICC and the world will see that we are determined to prevent having Americans and our friends and allies in Israel and elsewhere hauled in by this corrupt ICC.”

The ICC gave a green light in March to investigate U.S. forces in Afghanistan for “acts of torture, cruel treatment, outrages upon personal dignity, rape and sexual violence” allegedly committed in 2003 and 2004.

The court’s chief prosecutor, Fatou Bensouda, also recommended last month that the court charge Israeli forces for alleged war crimes in the Palestinian territories, which Israel captured in 1967 and intends to annex with U.S. support.

Pompeo emphasized that the United States and Israel are not party to the 1998 treaty that created the court. Both countries had signed it at first but withdrew before it could take effect.

It also has 23 open cases in ten conflicts around the world.

The probe into the Afghan war—which applies to both U.S. forces and the Taliban rebels—would be the first ever prosecution of U.S. troops by the ICC.

“I think the whole world can see this isn’t what the ICC was set up for. It was about rogue regimes,” Pompeo had told Fox and Friends in March. “Not institutions like America. When somebody gets it wrong here, we hold our own accountable. We always have. We always will.”

Pompeo has also faced bipartisan pressure to shield Israel from any ICC prosecution. Hundreds of legislators from both houses of Congress signed letters on May 13 calling on the Secretary of State to prevent “politicization” and “misuse” of the ICC in the Israeli-Palestinian conflict.

Germany, Australia, Austria, Brazil, Hungary, Uganda, and the Czech Republic have also urged the ICC to drop its investigations of Israel.

The disagreement hinges on whether Palestine is an independent state. The Palestinian Authority, which governs part of the Palestinian territories, joined the ICC in 2015, and has filed several complaints against Israel.

Pompeo wrote on May 15 that the United States does “not believe the Palestinians qualify as a sovereign state, and they therefore are not qualified to obtain full membership.”

But the ICC has defended its efforts as a professional law enforcement investigation.

“Fact: my Office is executing its mandate concerning Palestine situation [sic] with utmost professionalism, independence & objectivity in strict conformity with the [1998 treaty],” Bensouda wrote on social media last month. “Any insinuation or assertion to the contrary is simply misled & unfounded.”