Progressive Neo-McCarthyism: A Serious Threat to the First Amendment? 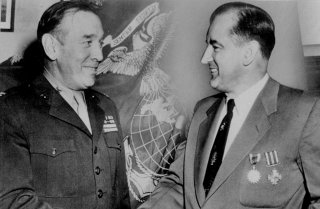 The stifling intolerance that Sen. Joseph R. McCarthy (R-WI) and his ideological allies fostered during the 1950s went far beyond the effort to purge government employees suspected of being part of the international Communist movement. The campaign also exerted pressure on the news media, universities, and the entertainment industry to exclude individuals subjectively considered to be disloyal.

There are more than a few unsettling similarities between the abuses committed during that period and the current calls to investigate and cancel (purge) individuals in those same occupations and professions who reject left-of-center ideological positions on an array of issues. In essence, America seems to be witnessing the early stages of mirror-image McCarthyism, with leftists harassing their opponents. And if that trend is not halted, we are likely to suffer similar deleterious effects. The original McCarthy era smothered the expression of iconoclastic, or even unorthodox, views on various issues, especially foreign policy, and the corrosion persisted well into the 1960s.

Given that history, we should be alert to any new attempts to demonize a political faction and seek to silence debate. However, manifestations of neo-McCarthyism are now taking place on multiple fronts. Echoes of McCarthyism are loud and growing louder.

So, too, is a campaign to compel ideological conformity and blacklist dissenters on a wide array of policy issues. One of the hallmarks of the McCarthy era was the plague of investigatory hearings that congressional committees conducted to root-out “subversives” in the opinion-shaping professions, including both the movie industry and the news media. That same pattern is recurring today, as illustrated by House Energy and Commerce subcommittee hearings in late February 2021 on “disinformation and extremism in the media.”

And just as the McCarthy-era hearings were designed to intimidate more than illuminate, the new investigations exhibit similar motives. The Wall Street Journal’s Kimberley A. Strassel noted one especially ugly aspect of the House subcommittee’s effort. “The precursor to the hearing was a revealing letter sent Monday by California Democrats, Reps. Anna Eshoo and Jerry McNerney. The duo demanded the CEOs of a dozen cable, satellite and broadband providers explain what ‘response’ they intended to take to the ‘right-wing media ecosystem’ that is spreading ‘lies’ and ‘disinformation’ that enable ‘insurrection’ and provokes ‘non-compliance with public health guidelines.’ Specifically, they asked each CEO: ‘Are you planning to continue carrying Fox News, Newsmax and OANN . . . ? If so, why?’”

Jonathan Turley, the Shapiro Professor of Public Interest Law at George Washington University, was deeply troubled by the behavior of the other Democratic members of the subcommittee as well. “What was most disappointing was that no Democratic members used the hearing to offer a simple and unifying statement: we oppose efforts to remove Fox News and these other networks from cable programming. Not a single Democratic member made that statement, which (in my view) should be easy for anyone who believes in free speech and the free press.” That silence, he concluded, was “chilling to the point of glacial.”

Three committees played especially active roles during the original McCarthy era. The best known was the House Committee on Un-American Activities—or as its critics altered the name to reflect the body’s ugly, arbitrary behavior, the House Un-American Activities Committee (HUAC). Once the Cold War erupted, the committee became an implacable nemesis of the political, especially antiwar, left. HUAC devoted a disproportionate amount of time to investigating the communist penetration of Hollywood. The scrutiny led to the blacklisting of prominent writers and actors—especially the so-called Hollywood Ten—but a number of journalists and academics also came to the committee’s hostile attention.

Another influential investigative body was the Senate Government Operations Committee’s Permanent Subcommittee on Investigations. McCarthy held a seat on that subcommittee when the Republicans were in the minority (1947–53) and chaired the body from January 1953 to January 1955, when the GOP narrowly controlled the Senate. McCarthy focused more on the State Department and other government agencies than he did on the news media, the movie industry, or academic institutions, but those were far from immune. The miasma of suspicion that McCarthy generated festered and persisted long after his personal political star plummeted.

The third head of the congressional investigative Hydra was the Senate Committee on Internal Security, which ultra-conservative Senator James Eastland (D-MS) chaired during the mid- and late- 1950s. Between 1952 and 1957, the Eastland committee compiled a list of more than five hundred suspect journalists. In a series of hearings mainly held during 1955, more than one hundred journalists were subpoenaed and interrogated about suspected ties between the Communist Party USA, and the newspaper industry. The committee even delved into alleged communist affiliations of some of the most prominent newspapers in the United States.

In his detailed account of the Eastland Committee hearings. Edward Alwood, associate professor of journalism at Quinnipiac University, notes that while the official rationale was to ask reporters and editors about any involvement they had had with the Communist Party USA, “the actual questioning went much further. The committee asked about their political interests and personal thoughts and beliefs. Members questioned newspaper editorial policies and hiring practices, areas that were thought to be sacrosanct under the First Amendment.”

Victor Navasky, longtime editor of the Nation, observes that the consequences of the hearings and other probes were far-reaching. “[A]t papers owned by a conservative like William Randolph Hearst or the Scripps-Howard chain, they conducted their own purges of suspected subversives.” Procedures also included signed “loyalty oaths” as a condition of continued employment. In some cases, reporters were fired merely because a witness at one of the hearings had named them as being communists. Even when no overt purges or blacklists resulted, the chilling impact on dissent in the press was palpable. Navasky highlights the comment of John B. Oakes, the editor of the New York Times editorial page: “McCarthyism has a profound effect on us all—on our writing, our speaking and even thinking.” Given the extensive use of intimidation through investigations, Kafkaesque public hearings, or “off the record” phone calls from government officials to private organizations, such a pervasive chilling effect was unsurprising.

It is more than a little unsettling that there is now a similar concerted effort to conduct congressional investigations of “extremist” groups and individuals. Pressure for taking such action was noticeable even before the January 6, 2021, riot at the U.S. Capitol, but since that episode, the demands for hearings have exploded. Sen. Mark Warner (D-VA), chairman of the Senate Select Committee on Intelligence, was the first to announce that his committee would hold hearings to investigate “anti-government extremists.”

Warner’s committee had already amassed a troubling record in previous hearings as far back as 2018 when it focused on possible “foreign influence” on social media platforms. Warner and several of his colleagues cautioned the CEOs of those firms that if they didn’t take more vigorous action to remove “disinformation” “fake news,” and “hate speech,” the government might well preempt them and impose content regulations. Lawmakers highlighted recent influence campaigns operated out of countries such as Russia and Iran, as well as the broader potential for information spreading on social media to incite violence and “foment chaos.”

When members of a powerful Senate committee issue warnings, it’s not the same as an ordinary citizen venting about media “misconduct.” Facebook COO Sheryl Sandberg’s attempts to placate legislators reflected that realization. She opened her testimony by saying the company had been too slow to spot abuse of the platform and “too slow to act” in the past. That defensive attitude was nearly identical to that of establishment newspaper, magazine, television, and movie executives during congressional hearings into “subversion” and “disloyalty” during the 1950s. The chilling effect posed by congressional intimidation is very real, and the increasingly intolerant, ideologically biased behavior on the part of Facebook, Twitter, and other platforms may well be at least partly a response to fears about government preemption.

It’s especially worrisome that the standards that proponents of hearings (and criminal prosecutions) use are exceeding imprecise. What they consider “extremism,” “incitement,” and “sedition” is at least as vague as the concepts of “subversion” and “disloyalty” were during the McCarthy era. And today’s strident faction seems intent on defining those offenses as broadly as possible. Indeed, the demand for ideological conformity seems even broader and more comprehensive than it did with the original McCarthyism. A Wall Street Journal editorial lamented that “progressives seem to believe that they are in a position to dictate the terms of what is acceptable speech in a more controlled media environment.”

“Right now, the greatest threat to free speech in this country is not any law passed by the government—the First Amendment stands as a bulwark,” notes Federal Communications Commissioner Brendan Carr. “The threat comes in the form of legislating by letterhead. Politicians have realized that they can silence the speech of those with different political viewpoints by public bullying.”

But the current crop of crusading, ideologically intolerant politicians is not the first contingent of would-be censors to discover such power. Joe McCarthy and his political allies were avid practitioners of the technique seven decades ago. It is just a bitter irony that the political descendants of liberals, who were the main victims of McCarthyism, are now using the same tactics in a campaign to silence their opponents.

Neo-McCarthyism Is Spreading Faster than the Coronavirus