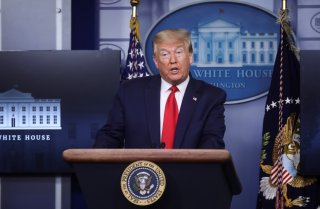 The passage of time has not been kind to allegations that Donald Trump and his 2016 presidential campaign colluded with the Russian government. Developments have been even less kind to the argument that Trump as president has been Vladimir Putin’s sycophantic puppet. Trump’s accusers need to abandon their foray into neo-McCarthyism before a weary public focuses its annoyance and disillusionment on them.

The tepid Mueller Report in 2019 struck a damaging blow to the principal rationale for the entire Russia collusion investigation. The (much belated) release of transcripts of witness testimonies before the House Intelligence Committee earlier this month likely has inflicted a death blow.

The Mueller Report did not find evidence to warrant any criminal indictments regarding offenses having to do with those central accusations—not against Trump, his associates, or any other American. Specifically, the report stated: “[T]he investigation did not establish that members of the Trump Campaign conspired or coordinated with the Russian government in its election interference activities.” The Intercept’s Glenn Greenwald provided a succinct summary of the results, asserting that Mueller “did not merely reject the Trump-Russia conspiracy theories. He obliterated them.” Greenwald added: “Several of the media’s most breathless and hyped ‘bombshells’ were dismissed completely.”

Conspiracy aficionados in Congress and the media did not abandon their Russia collusion theory, however. Indeed, there were constant echoes of the original allegations when House Democrats pressed their case for Trump’s impeachment in late 2019. The ostensible grounds for impeachment were Trump’s supposed misconduct toward the government of Ukraine, but always lurking in the background was the innuendo that his actions deliberately served Moscow’s interests.

As I’ve written previously, abundant evidence definitively refutes the notion that the Trump administration has pursued a pro-Russia policy. Indeed, from arms sales to Ukraine, to new rounds of NATO expansion, to U.S. withdrawal from the INF treaty, to Washington’s increased harassment of Russia’s allies and clients, Trump’s policies have been noticeably more hardline than those the Obama administration adopted.

The House Intelligence Committee transcripts further underscored the thinness of the Russia collusion allegations. “I never saw any direct empirical evidence that the Trump campaign or someone in it was plotting/conspiring with the Russians to meddle with the election,” former Director of National Intelligence James Clapper testified.  Other Obama administration officials, including National Security Advisor Susan Rice, made the same grudging admission in response to questions from committee members. Their testimony raised new questions about whether there were ever adequate reasons to launch a criminal investigation into the opposition party’s presidential campaign.

An even more startling revelation emerged from the hearing transcripts. CrowdStrike, the private cyber-security company that validated Democratic National Committee (DNC) accusations that Russia had hacked Democratic Party emails, had acknowledged to Congress that it had no concrete evidence that Russian hackers stole emails from the DNC server. It was no trivial admission since the firm had served as a critical source in the long Trump-Russia probe.

Investigative journalist Aaron Mate has noted that “CrowdStrike President Shawn Henry's admission under oath, raises new questions about whether Special Counsel Robert Mueller, intelligence officials and Democrats misled the public.” Mate added that “Henry’s recently released testimony does not mean that Russia did not hack the DNC. What it does make clear is that Obama administration officials, the DNC and others have misled the public by presenting as fact information that they knew was uncertain.  The fact that the Democratic Party employed the two private firms that generated the core allegations at the heart of Russiagate—Russian email hacking and Trump-Russia collusion—suggests that the federal investigation was compromised from the start.”

Former intelligence official Ray McGovern points out that the original reliance on CrowdStrike’s information and assessment reflected questionable judgment by the FBI and the Mueller commission. “CrowdStrike already had a tarnished reputation for credibility when the DNC and Clinton campaign chose it to do work the FBI should have been doing to investigate how the DNC emails got to WikiLeaks. It [CrowdStrike] had asserted that Russians hacked into a Ukrainian artillery app, resulting in heavy losses of howitzers in Ukraine’s struggle with separatists supported by Russia.” McGovern is correct about that episode. A Voice of America report examined how CrowdStrike was forced to retract that claim.

It is long past time for proponents of the Russia collusion conspiracy theory to back off. No reasonably objective observer can take the allegations seriously any longer. Persisting in that line of argument reflects little more than rabid partisanship.

Promotion of the collusion allegations has needlessly increased public animosity toward Russia and heightened already dangerous tensions between the two countries that possess the largest (by far) nuclear arsenals. Granted, the American public’s mounting anger toward China may ultimately cause that country to eclipse Russia as the perceived number one enemy of the United States, but hostility toward Russia nevertheless remains at worrisome levels. It’s possible that most people who originally embraced the Russia collusion allegations honestly believed them and concluded that a far-reaching investigation was warranted. But we’ve had that investigation, and given the many exculpatory revelations that have emerged over the past year, Trump’s accusers no longer have a credible excuse for their persistence.