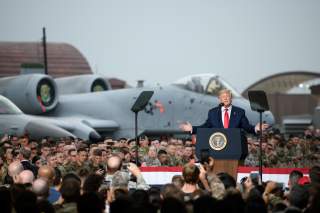 President Donald Trump’s repeated demands that the NATO allies pay more of the costs for collective defense have received abundant attention in Congress and the foreign policy community. Defenders of the status quo, alongside media personalities, have screeched that Trump has put in jeopardy Washington’s sacred transatlantic security architecture. But the president’s complaints about U.S. allies free-riding on America’s security efforts are not confined to Europe. As far back as the 2016 presidential campaign, Trump criticized Washington’s East Asian allies, especially South Korea and Japan, for similar laxity.

He has now launched a new phase in his effort to secure greater financial burden-sharing. The first salvo was his demand that Seoul agree to a five-fold increase in its annual payment to offset some of the costs of U.S. troops stationed in that country—a boost that would bring the total to $4.7 billion. Just days later, he called on Tokyo to quadruple its payment for U.S. forces deployed in Japan from $2 billion to $8 billion. There is now rampant speculation that he will adopt a similar stance toward the European allies, especially Germany, leading up to the NATO summit in early December.

In one sense, Trump’s demands are logical and long overdue. Historically, empires typically do not subsidize their security dependents. Washington’s policy since the late 1940s is an oddity in that respect. U.S. leaders have long complained about how its allies shamelessly allow the United States to pay for their security, but they have never taken substantive actions to halt this financial tactic. And despite Trump’s bombast during his presidential campaign and first months in the office about an America First foreign policy that would insist on greater burden-sharing, his actions followed the pattern of impotent grousing. Indeed, one of the Trump administration’s first actions was to dispatch Secretary of Defense James Mattis on a mission to reassure the NATO members and the East Asian allies of Washington’s undying dedication to their security. As with previous administrations, such fawning undercut any incentive the allies might have had to alleviate U.S. alliance burdens.

In another sense, though, Trump’s focus on financial burden-sharing misses a more fundamental point. The most crucial question is whether Washington’s current military commitments to allies and security clients serve the best interests of the American people. There certainly is ample room for doubt about the wisdom of acquiring a menagerie of small, vulnerable, and militarily useless “allies” on Russia’s perimeter, as Washington has done with the various rounds of NATO expansion. Those obligations should fail even the most basic risk-benefit calculation.

The outcome of such an analysis in East Asia is less clear cut but there is still considerable room for hard questions and policy changes. For example, does it make sense for the United States to continue shielding South Korea—a country that now has twice the population and an economy forty to fifty times larger than its North Korean adversary? The prudence of such a commitment is especially questionable when Pyongyang may have already achieved the ability to strike the American homeland with nuclear weapons. South Korea has both the financial strength and the technological capability to build whatever military forces it needs for national defense. Objections to withdrawing the U.S. troop presence and phasing out the security treaty grow weaker and more obsolete by the year.

Given China’s economic and military rise, a stronger case exists for preserving the alliance with Japan. Some key changes in that security relationship are imperative, though. Tokyo must explicitly eliminate the self-imposed limit of spending no more than one percent of its annual gross domestic product on defense. As one of East Asia’s major political and diplomatic players, and a country with the third-largest economy in the world, it is well past time for Japan to be a normal military great power as well. As part of that transformation, the U.S.-alliance with Japan must become one between genuine allies, not between a patron and a security dependent.

However, the U.S. security pledge to Tokyo ought not to be a blank check. A continuing defense relationship with Japan should not include backing Tokyo’s dubious claim to the Senkaku Islands—a chain of small, uninhabited rocks in the East China Sea. Beijing emphatically disputes Tokyo’s claim to those islets (which China calls the Diaoyu Islands) and some nasty naval incidents have occurred in recent years. U.S. leaders insist that the U.S.-Japan mutual defense treaty covers the Senkakus, even though that is an extremely strained reading of the treaty language. Washington needs to rescind that commitment. It is one thing to help Japan thwart a possible Chinese bid for hegemony in East Asia but risking a U.S. war with China over uninhabited rocks (even if there are valuable fishing grounds and possible energy deposits in the surrounding waters) is not a smart commitment. A continuation of the bilateral security relationship should be contingent upon the elimination of any U.S. commitment to back Japan’s claim to the Senkakus.

Although the danger exists that Trump’s focus on greater financial burden-sharing will continue to be a distraction from the more important substantive issues, there is a chance that it might become a catalyst for a badly needed reconsideration of America’s alliance obligations. Adherents to the status quo worry that the spike in Washington’s financial demands might cause South Korea, Japan, and other allies to worry about a U.S. “pullback” and reconsider their security relationships with the United States. Such a move is doubtful since they get very substantial benefits from continued U.S. protection. But if Washington’s greater financial demands compel them to consider greater security self-reliance, then it would be a good development. Even if they don’t move in that direction, U.S. leaders need to conduct their own comprehensive reassessment of Washington’s overgrown security commitments. Indeed, that reassessment is long overdue.