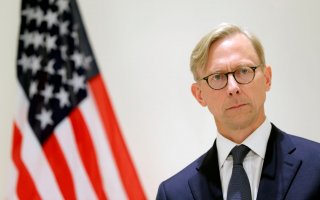 U.S. Special Representative Brian Hook said that increased Iranian misbehavior in response to U.S. pressure is “just another metric that it’s working” as he defended the Trump administration’s pressure policy.

Secretary of State Mike Pompeo has overseen what the State Department calls a “super maximum economic pressure“ campaign aimed at forcing the Iranian government to surrender on a host of foreign and domestic policies. But Iran has become bolder in threatening U.S. interests in the region.

“We have never claimed to have eliminated Iran’s asymmetric capabilities. That is the nature of modern terrorism,” said Hook, who oversees Iranian affairs at the State Department, at a Wednesday evening conference call. “They’re not used to being told no. They don’t like our policy. But to us, that’s just another metric that it’s working.”

Hook added that “we have deterred and disrupted Iranian operations now for a number of years, and the regime is facing its worst economic crisis in its 41-year history,” claiming that “because of our pressure, Iran’s leaders are facing a decision: either negotiate with us or manage economic collapse.”

But he also cited Iran’s increasing misbehavior since the pressure campaign began as a reason why more pressure is needed.

“The regime continues to use its nuclear program to extort the international community,” Hook said. “The Iranian regime’s threats are designed to intimidate nations into accepting Iran’s usual violent behavior for fear of something worse. We refuse to play by Iran’s rules.”

Hook blamed the previous Obama administration, which had brokered a deal between Iran and six world powers in 2015. Iran agreed to curb its nuclear research program and submit to inspections in exchange for economic sanctions relief.

“We have seen the Iran nuclear deal come at the expense of peace and stability in the Middle East because it gave an incentive for nations to look the other way on Iran’s non-nuclear threats, which include ballistic missile testing, missile and rocket proliferation, regional aggression, and hostage taking,” he said.

The current pressure campaign began when President Donald Trump pulled the United States out of the deal by imposing new economic sanctions, and Secretary of State Mike Pompeo issued a set of twelve demands for Iran.

Iran has since ramped up its nuclear activities past the limits of the deal, but most of the 2015 deal signatories insist that the deal is still in place.

Hook, however, claimed that breaking away from, rather than continuing, the deal was necessary to prevent an Iranian nuclear weapon.

He cited a propaganda poster published by the Iranian government, which shows the conquest of Jerusalem as the “final solution” to the Israeli-Palestinian conflict.

“Just recently, Iran’s Supreme Leader publicly invoked the ‘final solution,’ which is to endorse the Nazi policy of genocide against the Jews,” Hook said. “No country that threatens to annihilate Israel or any nation should be allowed the means to do so. The United States stands with Israel and many other partners around the world in ensuring Iran never develops a nuclear weapon.”