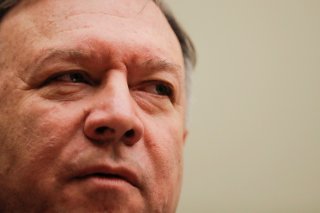 Secretary of State Mike Pompeo revoked permission for foreign companies to help convert Iranian nuclear facilities to peaceful use in another escalation of the nuclear standoff between the United States and Iran.

Russian, Chinese, and European companies are currently helping modify nuclear facilities to bring them into compliance with a 2015 deal between Iran and six other world powers—and have been protected from U.S. sanctions by temporary waivers up until now.

The waivers have been a long-time bugbear of Iran hawks who believe that the 2015 deal, known as the Joint Comprehensive Plan of Action, was too lax and would like to see the Iranian nuclear program ended altogether.

U.S. economic sanctions will now apply to companies working to downgrade the Arak reactor, import nuclear fuel for a research reactor in Tehran, and remove Iran’s spent nuclear fuel, which could be reprocessed into plutonium to make a weapon.

“Iran’s nuclear personnel need to make a choice – work for Iranian proliferation organizations and risk being sanctioned or put their skills to work for the Iranian people in pursuits outside of the proliferation realm,” Pompeo said in a statement.

However, work will still be able to continue at a reactor at Bushehr for at least sixty days “to ensure safety of operations.”

The Trump administration had renewed the waivers in January and March. Pompeo reportedly opposed the waiver extension in March, but was overruled by Treasury Secretary Steve Mnuchin.

The Washington Post first reported on Wednesday shortly after noon that the waivers were about to be ended.

The Foundation for Defense of Democracies sent out expert quotes on the Trump administration’s rationale by email just before 4 pm.

“Some will say ending JCPOA nuclear waivers gives Iran an excuse to threaten the world with more nuclear extortion. But the truth is nothing gives Iran an excuse to threaten nuclear extortion,” wrote Richard Goldberg, who had simultaneously served as an official in the National Security Council and a senior advisor for FDD from 2019 to 2020. “Iran threatens the world with its nuclear capabilities because it can – because the Iran Deal let Iran keep those capabilities intact.”

“The Iranian regime has continued its nuclear brinkmanship by expanding proliferation sensitive activities,” he said in a statement. “These escalatory actions are unacceptable and I cannot justify renewing the waiver for these JCPOA-related activities as a result.”

The United States and Iran have been locked in a nuclear standoff since the spring of 2018, when U.S. president Donald Trump broke from the 2015 deal and imposed economic sanctions on Iran.

Iran has retaliated by ramping up its nuclear activities, and declared in January that there were no longer “operational” limits on its uranium enrichment, but has continued to allow inspectors to visit its sites, and insisted that other elements of the deal are intact.

The Trump administration has used Iranian violations to push the United Nations to snap back sanctions on Iran, a move that Russia, China, and the European Union consider a non-starter.

“Now is the time to increase the pressure on Iran by snapping back UN sanctions,” Goldberg wrote. “A UN snapback would prevent the arms embargo and other key restrictions on Iran from ending—and it would restore the international standard of zero enrichment.”