Why the West Should Think Twice Before Testing Russia Over Crimea 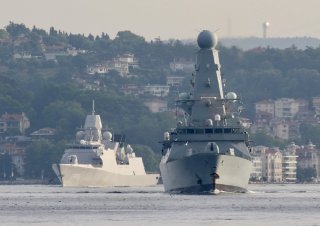 There are differing accounts of what transpired when the British destroyer HMS Defender passed off the coast of Crimea on June 23. Disputing reports and reactions in the wake of the event are telling as to how each party understands its strategic interest in the region. In the case of Russia, the event provided fuel for Moscow’s domestic narrative that Kiev is simply a Western pawn in the service of moving enemy forces closer to the Russian border. For the United States, this type of incident presents a high risk-low reward scenario in which Washington has little to gain and a great deal to lose in both image and clout.

British Prime Minister Boris Johnson stated that the HMS Defender was simply making a scheduled trip through Ukraine’s territorial waters “in accordance with international law.” Johnson stressed the point that Britain does not acknowledge the Russian annexation of Crimea. It is reasonable and even expected for a country in the international community to show solidarity with Kiev and admonish Russia over its actions in eastern Ukraine; however, acting as though a member of NATO can travel with impunity inside of what Russia (historically) considers its territorial waters fundamentally misunderstands how Moscow views its national interest.

Russian President Vladimir Putin expands on this when he claims that the deliberate British intrusion was coordinated with active involvement from the United States. According to him, a U.S. reconnaissance plane took off from a NATO airfield the same morning of the illegal incursion. In line with the standard narrative in Moscow, nothing of military significance takes place without the guiding hand of Washington. Putin went on to claim that the primary objective of the British ship’s passage was to ascertain military information from the Russian port at Crimea.

According to the Kremlin, the incidents of the past several weeks indicate Western ambitions to ignore international law and move military bases closer to the Russian border. The passage of the HMS Defender through Crimean waters is viewed as a direct attempt to undermine the spirit of Geneva, alluding to Putin’s meeting on June 16 with his U.S. counterpart President Biden. The summit was preceded several months earlier by Moscow acquiescing to Western uneasiness over Russian troop exercises near the Ukrainian border by ordering its forces back.

For Putin, the most alarming aspect of the HMS Defender incident was not that Pentagon Press Secretary John Kirby denied reports that the Russians had fired warning shots as “disinformation” – they have come to expect as much from Washington, and Russian media even put together a comedic video ridiculing Kirby’s statement  – but rather the perceived movement forward after Russia willingly took a step back. The judo black-belt Putin knows that an opponent stepping in to occupy one’s vacated space often precedes an offensive move. Moscow considers the ascension of Ukraine to NATO as strategically impermissible and is preoccupied with the notion of it becoming a Western outpost on the border with Russia. To demonstrate their resolve in the face of this perceived aggression Russia conducted military exercises in the Black Sea on July 3 in which warplanes practiced bombing enemy ships. The escalating rhetoric in the wake of the HMS Defender incident begs the question: What strategic advantage does the West gain from this type of provocative maneuver?

Some may argue that it is to strengthen our military relationship with Ukraine and express our commitment to Kiev as an ally. However, we do not need to accept the annexation of Crimea to avoid unnecessarily antagonizing Moscow and risking military confrontation. Again, Washington can continue to support the road to democracy for an aspiring country but reality dictates that the U.S. take both historical and geographic realities into consideration. Moscow will not acquiesce to Ukraine joining NATO. Putin puts it in the proper perspective when he states that Russia would never back down from a military confrontation at its own border before the West would: “It was not us who came to them [to perform military exercises] thousands of miles away.”

A realist approach to foreign policy concludes that Crimea is a fait accompli for Russia – at least while the country is under the Putin administration (and given his moves to cement power, this will likely be the case for the foreseeable future). Britain’s move inside the disputed territorial waters of Crimea is undoubtedly a provocation outside of its own national interest or that of any other NATO country. This type of behavior risks brinkmanship that the U.S.-led alliance in the end is likely to lose face over. As each side gradually pushes the boundaries, pulling back becomes more difficult as the resulting damage to each country’s reputation increases. At the more extreme end, even a small-scale military encounter would likely garner only initial sympathies from domestic populations in the West. The inevitable escalation by degrees of any military encounter on Russia’s border will wither Western support long before Russian resolve.

The foreign policy of the United States and its allies would be better served by continuing to support the democratization process in Ukraine, providing support to Kiev as it implements domestic reforms that address rampant corruption and its current backslide towards authoritarianism. Providing military support and training to Ukrainian forces as they battle separatists in the east of the country additionally demonstrate that the West actively supports aspiring democracies facing pressure from threatening neighbors; however, the illusion that the United States or any NATO member is willing to engage in a protracted war over de facto Russian territory should be dispelled.

Russia needs to be caught in the act when it engages in illegal activity on the global stage. By all means, the United States should send clear signals to Moscow that it will meet extraterritorial Russian aggression with an asymmetric response. Putin has preemptively called the United States’ bluff when it comes to Crimea, however, and further pursuing a strategy of brinkmanship in this area will only tar the reputation of Washington and its NATO allies.

Dominick Sansone is a graduate student at the Johns Hopkins University School of Advanced International Studies in Bologna, Italy.