Why Ukraine Is a Dangerous and Unworthy Ally 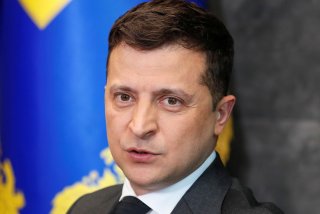 The Atlantic Council, the de facto headquarters of the pro-Ukraine lobby in the United States, has led a surprisingly insistent effort to rebut criticism of Ukraine. It appears to be in denial of Kiev’s mounting authoritarian tendencies. After all, Ukraine is a strategic snare, not a strategic asset, for the United States.

Doug Klain, a program assistant at the Atlantic Council’s Eurasia Center, launched the first salvo just a week later on this website. A subsequent, longer and nastier op-ed was published on June 19 by Andreas Umland, a research fellow with the Stockholm Center for Eastern European Studies at the Swedish Institute of International Affairs. The op-ed was showcased in UkraineAlert on the Atlantic Council’s own website.

Klain’s case consists of a rather thin gruel. He contends that “Ukraine is a strategic asset for any nation interested in the type of rules-based international order that Moscow seeks to erode.” However, the “rules-based international order” is little more than a self-serving cliché. The United States and its allies have violated that so-called norm whenever convenient. Washington’s actions in overthrowing governments it disliked. It has done this through CIA coups in Iran, Guatemala, the Congo, Chile, and other places. Additionally, Washington has also led outright regime-change wars in Iraq and Libya.

And as far as Ukraine being a worthy asset for any nation interested in the (fictional) rules-based order, Klain glosses over the extensive role that Svoboda, Right Sector, and other ultranationalist and outright neo-Nazi factions played during the 2014 Maidan Revolution. He also says little about the continuing ugly manifestation of those values, although he does grudgingly concede that anti-Semitism is “a real issue.” Klain says even less about censorship laws and other restrictive measures that have become standard fare for Ukrainian administrations since the Maidan Revolution.

It’s never a good sign about the strength of your case when your final paragraph opens with the sentence, “[President] Zelenskyy and his team have made major missteps since March 2020, but all hope is not lost.” Pro-Ukraine lobbyists don’t have a lot to work with, though, so Klain has to be content with such an anemic comment.

At least Klain did not resort to ad hominem attacks, but the same cannot be said for Umland. Instead, drive-by smears come early and often. Even the title of Umland’s op-ed, “The Dangers of Echoing Russian Disinformation on Ukraine,” appears like a jeer. One of his early assertions ventures farther down the road of guilt by association. “Ever since the onset of Russian aggression against Ukraine in early 2014, the undeclared war between the two countries has unfolded alongside an avalanche of deliberate disinformation,” Umland noted. “Most of this has come from Russian state media or the Kremlin itself, but an ideologically diverse range of Western sources have also echoed many of Moscow’s more outlandish claims.”

Umland peppered his op-ed with “Russian tool” innuendoes and lashes out at an op-ed of mine that was published in May. “Carpenter employs a selection of half-truths, misinterpretations, and cherry-picked facts to paint a dark picture of rising authoritarianism and nationalism in today’s Ukraine,” he states in his op-ed. “His talking points would be instantly recognizable to Russian TV viewers, who have encountered similar disinformation on a virtually daily basis for the past seven years. One can only guess at Carpenter’s motives.”

The late, unlamented Senator Joseph McCarthy might well approve of such debating tactics, but professionals in the foreign policy community should not do so. My only consolation is that Umland’s vitriol is not directed solely at me. “Since 2014, commentators on both the left and right wings of Western discourse have joined in the chorus of doubters repeating Russian claims that are designed to poison opinion against Ukraine and take the shine off the country’s narrative of democratic transformation.”

Actually, Kiev’s behavior, including rampant corruption and efforts to smother domestic critics, has done far more to “take the shine off of” that narrative. And those offensive actions have been criticized by such notorious mouthpieces of Russian disinformation as Amnesty International, Human Rights Watch, the Organization for Security and Cooperation in Europe, and other independent observers. The argument that perceptions of growing Ukrainian authoritarianism are merely the result of Russian disinformation campaigns is attempted historical revisionism at its worst.

When Umland deigns to address substantive issues, the results are unimpressive. He has to concede that “today’s Ukraine is not yet a model liberal democracy. In Freedom House’s latest global survey ranking countries according to civil and political rights, Ukraine received 60 points out of a possible 100, leaving it far behind paragons such as Norway, Finland, and Sweden.”

However, the rating did not just put Ukraine behind such democratic paragons, it put the country squarely in the worrisome “partially free” category. Others in that group include Bangladesh, Bosnia, Guatemala, Victor Orban’s Hungary, Lebanon, and Serbia. Indeed, Ukraine ranks just four points above Rodrigo Duterte’s Philippines.

Even the trend with respect to Ukraine is not encouraging. Four years ago, the country’s overall Freedom House rating was sixty-one points. Deterioration was evident in the civil liberties category. In the 2017 report, Kiev received thirty-six points; in 2021, the figure had declined to thirty-four points.

Umland stresses that other countries emerging from the former Soviet Union are noticeably more autocratic than Ukraine, noting that Russia received a rating of twenty points and Belarus received eleven points. He could have added that Kazakhstan was in the same dismal category with twenty-three points. But no one expects the United States to defend such countries militarily or praise them as vibrant democracies. Umland, Klain, and other fans of Kiev expect Washington to do both.

Despite the growth of pro-Ukraine propaganda, the country fails to warrant inclusion as an important U.S. ally, either on the basis of strategic benefit or moral credentials. Strategically, Ukraine is a snare that could play the same role for the United States that Serbia did for Czarist Russia in 1914. From a moral standpoint, Kiev’s democratic image is thoroughly tarnished, and no amount of polish that Ukraine’s passionate lobbyists in the West try to apply can alter that reality. Ukraine is both a dangerous and unworthy ally for the United States.

Ted Galen Carpenter, a senior fellow in defense and foreign policy studies at the Cato Institute and a contributing editor at the National Interest, is the author of twelve books and more than nine hundred articles on international affairs.