Could Cyber Defense Deter a War Over Taiwan? 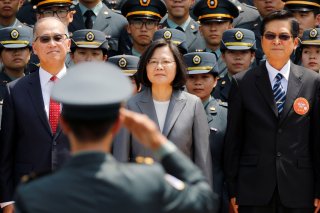 While reading a critique of a proposed Chinese deterrence strategy in The National Interest, “Can America Prevent a Chinese Invasion of Taiwan?” published on June 5, I was struck by the author’s lack of analysis of the impact of a denial of semiconductor manufacturing capabilities on the Chinese economy. I agree that the threatened destruction of semiconductor manufacturing in Taiwan may not deter China alone, but more realistic and easily implementable denial measures could be an essential factor in near-term Chinese invasion risk assessments. Drawing from more recent Russian lessons in Ukraine, international sanctions denying certain critical materials are indeed grinding down the Russian war machine. Despite the vast difference in manufacturing capabilities between the two countries, China still has critical weaknesses, starting with semiconductors.

The world’s economy and everyday life are increasingly dependent on data, cyber capabilities, and technology. Data is the new oil fueling the engine of economic growth in wireless communication, robotics, artificial intelligence, and cyber defense. Every engine has keys and today, those keys are digital.

Semiconductors and specifically microchips are the brains of modern electronics, enabling “smart” health care, communications, computing, transportation, clean energy, and more. Without a secure, stable, and safe chip supply, consumers cannot have smartphones, cars, video games, or coffee makers. Planes will not fly. Hospitals will shut down because of equipment failures. Transactional and financial data will not flow. The world is increasingly reliant on microchips for everything, including essential goods and services. No technology issue is more critical to global economic success and national security than preserving the semiconductor supply chain.

The Pentagon has become largely dependent on the commercial market for computer chips and 98 percent of the commercial microelectronics the Pentagon needs are assembled, packaged, and tested in Asia. In support of legislation recently passed by Congress aimed at boosting U.S. chip production, Deputy Secretary of Defense Kathleen Hicks noted, “Semiconductors, it’s not an overstatement to say, are the ground zero of our tech competition with China,” adding that semiconductors are vital for technologies ranging from artificial intelligence to hypersonic weapons and next-generation networking.

Taiwan, which is located about 100 miles off the coast of mainland China, is home to 66 percent of the chip foundry capability in the world, including 92 percent of the world’s advanced chip production. The second largest chip supplier, South Korea, accounts for 18 percent of global output but shares a border with North Korea, China’s regional puppet. Industry experts estimate that U.S. tech firms rely on Taiwanese manufacturers to produce up to 90 percent of their chips, resulting in the “silicon shield” that contributes to a renewed American commitment to Taiwan’s defense. Currently, China overwhelmingly relies on foreign chip makers that produce only about 6 percent of the world’s output. China imported $350 billion worth of semiconductors in 2020—more than the value of the crude oil it imported the same year. Taiwan was a primary beneficiary. Even more sobering, China’s market share in advanced chips is currently stagnant and faces limited long-term growth prospects.

The world is racing to build more microchip plants, but at costs between $17 and $20 billion a copy and a minimum three-year construction period, it’s not happening fast enough to meet growing demand. The extreme ultraviolet (EUV) lithography machines used to make chips are complex systems manufactured by only one company in the Netherlands. The technology is accessible only to a handful of manufacturers, including those in Taiwan, to make advanced chips.

Current U.S. policies preclude China from buying select chip-making equipment. The United States has used its power to impose bans and sanctions on the supply of advanced chips to Huawei and other Chinese companies by restricting the use of American technology to produce their products. Furthermore, a major Taiwanese chip manufacturer has joined an American chip coalition designed to strengthen the connection among major players in the American-led industry. In 2016, President Xi Jinping said, “the fact that core technology is controlled by others is our greatest hidden danger.” Vice Premier Ma Kai also warned at the 2018 National People’s Congress that China “cannot be reliant on foreign chips.” China may rally around reunifying Taiwan with the mainland, but access to resources for economic dominance in a data-driven future is the keystone to its Made in China 2025 strategy. But, if you can’t make them, take them. For Beijing, it’s just a matter of when and China will not wait for the United States to bolster Taiwan’s defense.

The United States and its allies have few options to deter a hostile takeover.  As recent wargames at the Pentagon have revealed, China’s geographic advantages and recent technological advances, including emerging cyber capabilities, make the prospect of defending Taiwan without grave losses daunting.

Another Option for Strategic Deterrence

An interesting deterrence strategy published by The US Army War College Quarterly: Parameters recently proposed that China must be convinced that conquering Taiwan will create a major domestic economic crisis, focusing on foundries as the bargaining chip. According to the article, a targeted scorched-earth plan to destroy chip plants and equipment “would render Taiwan not just unattractive if ever seized by force, but positively costly to maintain.” It explained that “China’s high-tech industries would be immobilized at precisely the same time the nation was embroiled in a massive war effort.” The free world could recover from the significant supply chain loss while denying China economic growth.

Instead of destruction, hide the keys to the digital kingdom in Taiwan. Global chip foundries rely on advanced information and operational technology networks to function. The world is already engaged in cyber warfare as attacks target network access to extract data, spy on adversaries, or disrupt operations. In response, trillions are being spent on cyber defenses and security to patch vulnerabilities, protect access, deny entry, and verify the identities of those wanting the keys to data, networks, and operations. These rapid advancements include technologies to develop and safeguard digital keys with a high degree of assurance.

Cyber capabilities can be used for good. The United States should let China know that the free world’s semiconductor coalition has collaborated on a mutual digital defense pact to deny access to the one supply chain they need the most. Encrypting keys and credentials for critical programs and processes in the foundries and associated industries, and keeping them safe in the most advanced supercomputers in the world could be a critical part of a larger deterrence strategy. An insurance plan to extract certain critical EUV components from the machines to render the foundry useless in a matter of hours if threatened could also be included. The ability to quickly restore foundry operations could be a powerful lever in any subsequent negotiations should deterrence fail.

The Speed of Relevance

Given the recent rhetoric and provocations coming from China, including the threat to kill senior U.S. government officials for visiting Taiwan, the United States may not have years to build additional deterrence capabilities. These digital locks can be installed among cooperative nations and companies to safeguard machines in a matter of weeks. In an age when digital capabilities and advanced manufacturing are necessary for prosperity, using emerging cyber capabilities to deter aggression and preserve peace, not just to create havoc and risk, might be the best way to prevent a war over Taiwan.