Decoupling From China Is a Fools Errand 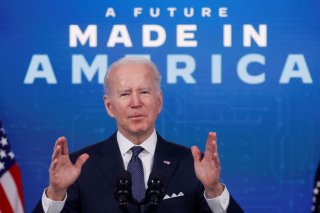 Thirteenth-century Venice, like the high-tech economy of the twenty-first-century United States, faced a challenge that threatened the famed republic’s economic prosperity. The natural advantages enjoyed by Venice’s internationally renowned glass makers, like the leading computer chip makers today, were under threat from foreign competition, the theft of intellectual property, and the departure of skilled artisans lured by the promise of higher pay elsewhere in Europe.

Venice adopted an elegant if brutal solution to this dilemma. On November 8, 1291, the Venetian Great Council ordered the city’s entire glass-making industry—all of its factories and artisans—to relocate to the small island of Murano nearby.

To prevent the export of the city’s technological and manufacturing advantages, glassmakers faced steep fines or imprisonment if they left the environs without permission. Determined to prevent the loss of its monopoly over intellectual property and to maintain its stranglehold on industrial innovation, city fathers ruled that any master caught leaving the city could be sentenced to death.

To compensate for these draconian restrictions, artisans were granted preferred social status, formalized in the island’s “Golden Book.” This new industrial aristocracy was awarded unique privileges. They could carry swords and were immune from prosecution. Their daughters and sons became sought-after partners for the Venetian aristocracy.

The glassmakers of Murano, and Venice’s economy as a whole, reaped the fruits of this mercantilist policy for a long time.

Today, the Biden administration faces a challenge that medieval Venice’s politicians would well recognize—controlling the development and dissemination of computer chips that drive the international economy. Like its Venetian predecessors, the Biden administration aims to protect its monopoly by “decoupling” critical technological capabilities enjoyed by the United States and its allies from those under Chinese control. President Joe Biden, like Venice’s town fathers before him, hopes that the competitive advantages still enjoyed by U.S. and Western (including Taiwanese and South Korean) chipmakers will be protected forever.

It wasn’t meant to be this way.

Since the famed 1972 meeting between Richard Nixon and Mao Zedong, U.S. policymakers have comforted themselves with the expectation that China’s rise would make it more like America—a proponent of free trade, free enterprise, and democratization.

“Decoupling” from China (and for different reasons Russia) and “reshoring” key U.S. industries, reflects the new unexpected spirit of U.S. enterprise that has turned long-held assumptions driving U.S.-China relations on their head.

As far as state intervention in the economy—directing capital to favored industries and companies, and the associated commitment to “pick winners”—Washington is becoming more like the bare-knuckle mercantilists in Beijing.

Biden is the booster in chief for this new look in U.S. policy, as is Chinese president Xi Jinping. At a recent groundbreaking ceremony for a new Intel plant in Ohio, Biden declared:

Folks, we need to make these chips right here in America to bring down everyday costs and create good jobs. (Applause.) Don’t take my word for it. … Listen to the business leaders across this country. They’re making decisions right now about where to invest and produce these chips. China, Japan, South Korea, European Union — all these places are investing tens of billions of dollars to attract chip manufacturers to their countries. But industry leaders are choosing us, the United States, because they see America is back and America is leading the way.

As in thirteenth-century Venice, today in Washington the power of the state is being unsheathed and expanded in what may well be a costly and quixotic effort to force the private sector’s adoption of a political security and economic agenda aimed at preventing the diffusion of knowledge, industry, and innovation to China.

Even among Washington’s Asian allies, not everyone is convinced that Biden’s way is the right way. Singaporean prime minister Lee Hsien Loong, for example, recently voiced his concerns about Washington’s latest moves.

Decoupling is a worry. National security concerns are real. How wide or how narrowly they are defined, is the judgment of each government and administration. I think the Biden administration’s latest move is a serious one. I am sure they have considered it carefully. It can have very wide ramifications. We will have to see how things work out. But we will do worry that valid national security considerations may trigger off further consequences and may result in less economic cooperation, less interdependency, less trust, and possibly, ultimately a less stable world.

It was once a truism to declare that what was good for General Motors was good for America. A system of international commerce created in this image provided a solid foundation for America’s economic and military supremacy for a generation.

Today, this axiom has been turned on its head. The Biden administration now argues that what is good for Washington might not necessarily be good for the likes of Ford, Mercedes, and McDonald’s, which are now shuttering their operations in Russia. Companies once encouraged by Washington’s political class to explore business opportunities in Russia are now bowing to its diktat to abandon their stakes. American and European chip companies are now forced to accommodate the Biden administration’s intent to prevent China from competing with Western and other Asian firms or supplying their industries with the most advanced computer chip technology and personnel.

It is now left to China to preach to the world the benefits of “win-win” solutions offered by free trade. Like the famed master artisans of Murano, forced to live and work in a gilded cage, high-tech expatriates now working in China and their parent companies are being forced to “reshore” themselves in the expectation that China’s effort to manufacture chips as wonderful as those produced by the United States and its allies will be short-circuited.

In this regard, Murano’s experience may be instructive. Despite its efforts, the glass industry in Murano was unable to stem the diffusion of intellectual capital and skilled personnel to competitors in Europe. Today, the glass-making industry on the famed island is a shadow of its former self. Its galleries are losing the competitive battle against glass made in China, which is equal in quality and cheaper in price. To survive, the once proud galleries are selling Chinese knockoffs as their own.

Geoffrey Aronson is a non-resident scholar at the Middle East Institute in Washington, DC.