How Pakistan Is Using Technology to Save Lives 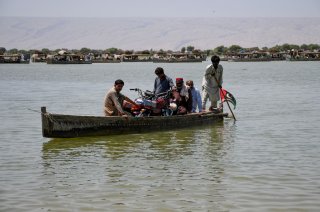 Amidst all the economic and political challenges Pakistan faces, it has earned bragging rights for its public awareness campaigns, including the National Action Plan campaign to drive Covid-19 vaccinations and, most recently, a campaign to warn the public about the undeniable dangers of climate change. How did these government awareness campaigns succeed? Pakistan, a country of over 220 million people, has a high mobile phone penetration, which the government is now using to its advantage.

Despite its meager resources and chronic economic problems, including rising import bills and increasing inflation, Pakistan has managed the Covid-19 pandemic relatively well. It returned to normalcy relatively quickly by employing a multi-pronged policy centered around an effective communication strategy, thanks to its high mobile phone use.

Utilizing Pakistan’s 175.62 million mobile phone users, the government first educated the public about Covid-19 prevention by sending targeted text and voice messages that appealed to people’s self-preservation. Every time a mobile number was reached, a message prompted the caller to protect their loved ones from Covid-19, appealing to their altruism. In the second phase, it successfully countered vaccine hesitancy through voice messages to the same individuals. The government is now using a similar strategy to mobilize and educate the masses about how to protect themselves from climate deterioration due to severe floods and heat waves. And this could not have come at a better time: today, one-third of Pakistan is flooded with a high volume of water attributed to climate change.

While Pakistan ranks extremely low on the environmental performance index, the country is highly vulnerable to extreme weather events, as evidenced by the recent floods and heat waves impacting millions of Pakistanis. Pakistan, undoubtedly, faces a severe climate change crisis!

While Pakistan’s previous government had taken some steps to alleviate environmental deterioration, increase its climate change adaptation, and educate a public gravely unaware of the imminent climate crises, the effective mobile phone communication strategy is certainly praiseworthy. The strategy relies on an automated message delivery system to mobile phones in Pakistan giving users directions on how to protect themselves and their loved ones from climate disasters.

Finding a way to directly engage key stakeholders in climate change adaptation is a significant accomplishment in a developing country where climate change is overlooked as an imminent danger. This policy will benefit the government by increasing public trust and public self-efficacy. In the future, the government may tweak messages focusing on climate change mitigation to educate the masses on how to prevent climate deterioration in the first place.

Although the existing Covid-19 communication strategy consisted of blanket messaging across all regions of Pakistan, the government should adopt a more precise and targeted approach to environmental degradation programs since different areas face distinct challenges. For example, some regions require planting more trees while others require efficient water use. In other words, geo-mapping users is essential for sending localized climate change messages.

Pakistan offers a success story of raising awareness among a widely undereducated population about climate change adaptation through an effective technology-based communication strategy. However, it could certainly improve these efforts by integrating content on mitigation and prevention as well as tailoring messages to regional needs. With any luck, other countries in the region might emulate Pakistan’s example to increase awareness about climate change as well.

Muhammad Salar Khan, Ph.D., is Don E. Kash Postdoctoral Fellow in Science & Technology Policy at Schar School of Policy & Government, George Mason University. He tweets at @salarppolicy. Farah Latif, Ph.D., is a strategic communications practitioner. She also serves as a Fellow at the Center for Media and Public Affairs at George Mason University. She tweets from @FARAHLATIF.