The Climate Disaster in Pakistan Is Even Worse Than It Seems 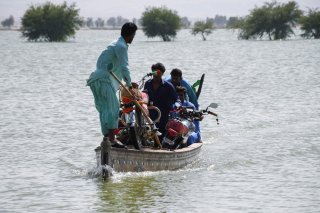 Nearly 1,200 people have died, and thousands more injured, because of the massive flooding in Pakistan. There has been at least $10 billion in property and agriculture damage. One-third of the country is under water and at least 33 million people have been affected—the floods are causing more havoc with every passing day. To understand the magnitude of this disaster, the number of people affected by the recent flooding in Pakistan exceeds the populations of Denmark, Finland, Sweden, and Switzerland combined. Pakistan has five times the number of internally displaced people than Ukraine does because of the Russian invasion.

The last time there was a flood of this magnitude in Pakistan was in 2010 when 20 million people were affected. This month, the rainfall was 780 percent higher than the normal average. The global climate catastrophe has become an existential crisis for Pakistan—a country that contributes only 0.4 percent to global emissions and whose neighbors, China and India, together contribute one-third. Temperatures are rising, rains are abrupt, and drought and food shortages are choking the agricultural economy. For a significant part of Pakistan’s population, the floods have been a death knell

The floods came at a time when Pakistan is suffering from one of the worst economic crises in its history. Just a few weeks ago, Pakistan’s situation was being compared to Sri Lanka’s economic collapse, which it is very close to replicating. There has been rampant hyperinflation and the Pakistani rupee has heavily depreciated while fuel prices have rapidly increased in the last few months, reducing consumer purchasing power. Amidst such a dire situation, the floods have taken away the few means that were left for people, especially on the periphery, to survive. Almost half of the cotton crop has been destroyed and more than 700,000 farm animals have died. Attached to them were many livelihoods.

When the flooding ends, everything will not go back to normal. Floods wash away years of hard-earned capital and since Pakistan is a relatively poor country, it is the impoverished who are the most affected by natural disasters such as flooding. Along with the increase in the cost of living, the climate disaster has increased the physical and financial insecurity of Pakistan’s poorest. Moreover, as a result of the flooding, waterborne diseases are spreading rapidly and there is a shortage of medicines, the cost of which has increased by roughly 200 percent on average over the last few years. Additionally, since the floods inflicted significant damage on agricultural yields and livestock, there is now a food crisis. The areas that have been hit the worst by flooding rely on agriculture as their primary source of income. Millions of people have lost their means of production and a further food price hike is around the corner.

As the flood situation worsens, the political atmosphere in the country remains heated. Even amidst a climate disaster, the ousted prime minister Imran Khan has not stopped arranging power shows. Khan recently said that “rallies will continue during heatwaves, floods and even wars.” In such a politically charged atmosphere, the attention of the masses is taken away from the flood victims even as their homes and crops are being wiped out in front of their eyes. The fight between political dragons comes at a huge cost to ordinary people, who will suffer the most.

Amidst all the political chaos, relief efforts are being made. However, they fall well short of what is required. First, given the scale of the damage, Islamabad and non-governmental organizations (NGOs) do not have the capacity to meet the immediate needs of flood victims, despite their best efforts with limited resources. Second, Ansar Mahmood—a civil engineer and a social worker volunteering to help flood victims—has told me that the areas where flood victims reside are difficult to reach since connecting roads have been destroyed in the affected areas. Third, for now, there is little that the government can do to immediately alleviate emerging waterborne and other diseases, the spread of which is being exacerbated by flooding. Fourth, seventy-two out of 160 districts have been affected by the floods, according to the National Disaster Management Authority (NDMA). This means that Pakistan will be facing the repercussions of the flood for many years to come. Finally, Pakistan is the eighth most vulnerable country to climate-induced disasters. Compared to the world average of 4.79 tons, Pakistan emits only 0.87 tons of carbon dioxide per person. As a result, Pakistan is facing acute environmental challenges because of problems it has done little to contribute to.

“Let’s stop sleepwalking towards the destruction of our planet by climate change. Today, it is Pakistan. Tomorrow, it could be your country,” United Nations secretary-general Antonio Guterres warned. Addressing climate change must become the top priority in a world that is watching impoverished countries suffocate under cataclysmic floods and droughts. Pakistan is not the only country affected by climate disruptions without having contributed much to it. An international mechanism needs to be put in place to organize a united effort to mitigate the effects of climate change in the developing world. Pakistan’s situation should serve as a warning sign of what is to come if no serious international effort is made to protect the most vulnerable.

Muhammad A. Basit is a Pakistan-based political scientist and independent journalist. His work has appeared in The Diplomat, Independent Australia, The News International, CGTN, Modern Diplomacy and Daily Times.