UN Seeks $160 Million in Pakistan Flood Aid, But Will It Be Enough? 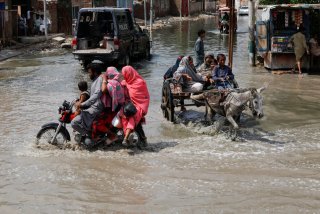 The United Nations appealed to the international community for an additional $160 million to devote toward humanitarian relief efforts in Pakistan, days after “epochal” rains and flooding killed more than 1,100 people and affected tens of millions of others.

The rains, caused by an exceptionally violent monsoon season, have caused a series of flash floods, destroying crops and washing away homes and infrastructure. Much of the damage has been caused near the Indus River, which flooded its banks following the monsoons and left millions of Pakistanis living along it homeless. An estimated 3,000 kilometers of road, and as much as two million acres of agricultural land, have been destroyed in the country so far.

“Pakistan is awash in suffering,” UN secretary-general Antonio Guterres claimed Tuesday in a video message as part of the international organization’s funding appeal. “The Pakistani people are facing a monsoon on steroids—the relentless impact of epochal levels of rain and flooding.”

Guterres also highlighted the disaster in Pakistan as a reminder of the damage of climate change, emphasizing the need for collective action within the international community to prevent its worst consequences.

“Let’s stop sleepwalking toward the destruction of our planet,” the secretary-general said. “Today, it’s Pakistan. Tomorrow, it could be your country.”

The downpour affects roughly one in seven Pakistanis or thirty-three million people. Meteorologists have warned that more rain will likely fall in the coming weeks.

Although the $160 million in aid will likely save thousands of lives in the flooding’s immediate aftermath, Pakistani ministers have warned that the floods have caused at least $10 billion in direct economic damage, with ongoing costs expected to increase in the coming months. Pakistani foreign minister Bilawal Bhutto-Zardari noted that “hundreds of thousands” of flooding victims had escaped the immediate danger of drowning, but continued to live outdoors without reliable access to food, water, or healthcare.

“We urgently need shelter and tents, and mosquito nets,” Zardari said while lauding the Pakistani government’s ongoing efforts to respond to the disaster. He emphasized that the international community bore some responsibility for aiding the country, as Pakistan contributes very little to global CO2 levels but has suffered disproportionately from a climate change-related disaster.

Guterres claimed that the proposed $160 million would target more than five million Pakistanis with emergency humanitarian assistance, including food, water, sanitation, and the resumption of education.