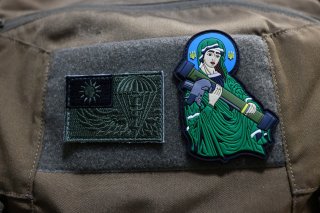 Roughly four months into the war in Ukraine, images of a cartoon Shiba Inu dog were popping up all over Twitter. It started when the Georgian Legion, a volunteer military unit fighting Russian forces in Ukraine, was trying to raise money for equipment. In response, a Polish artist who posts under the name “Kama” began creating Shiba Inu avatars for the “fellas” who donated to the Legion. Shortly after, the North Atlantic Fellas Organization (NAFO) took social media by storm, and internet memes of Shibas quickly became a movement devoted to countering pro-Kremlin disinformation about Russia’s invasion of Ukraine.

Russia has always been good at spreading propaganda and disinformation campaigns but this time, NAFO is making it more challenging for the Kremlin to control the narrative. On average, more than 5,000 tweets a day link to NAFO, most of which can be found in threads from Russian officials. In addition to making wholesome Shiba memes and fundraising, the Fellas have also created a Discord server to strengthen the NAFO community by providing tips on what content could be targeted, sharing news about the war in Ukraine, and debunking Russian disinformation. Consequently, Russia’s St. Petersburg troll farm is no longer the dominant entity wielding the power of trolling to disseminate narratives about the war. Ukraine-sympathetic social media users, like NAFO, have joined forces to support Kyiv’s war effort, flooding the internet one Shiba Inu meme at a time.

Some fear that there are risks associated with NAFO’s “shit-posting,” Twitter-trolling, and Shiba-deploying tactics, such as downplaying the realities of war through comedic insolence. Others, however, claim that NAFO activities validate these movements as more than mere acts of slacktivism, clicktivism, or any kind of communication with little to no real impact. By September, NAFO and its partner organization Saint Javelin had raised close to $300,000 in funds to support units fighting in Ukraine. On Twitter, NAFO has over 55,000 Twitter followers with around 900 posts, all of which have high engagement rates.

NAFO’s increasing global reach and popularity has unveiled a potential new policy idea highlighting the importance of disarming disinformation in real time. Until now, Western responses to state-sponsored disinformation have focused predominantly on proactive measures that cultivate societal resistance, such as media literacy training and advocacy. NAFO’s reactive approach is the first of its kind to effectively counter pro-Kremlin disinformation campaigns at this scale.

The twentieth century introduced an imperial transfer of power from the governors to the governed, effectively democratizing the ability to influence. Nation-states still compete to influence the perceptions of their adversaries’ population, but now individual private citizens—separate from state operations—also play a part in swaying perceptions. As such, it is only fitting that the governed leverage the power of social media to counter contested state-backed narratives. NAFO is an excellent example of how the governed can virtually assemble to create vigilante-like organic communities dedicated to countering disinformation. The masterful use of humor has proven effective in strengthening the reach of their message, shaping international perspectives, challenging misleading narratives without undermining their credibility, and stumping the Kremlin’s ability to react.

Nevertheless, it would be a mistake to assume that NAFO is immune to becoming a target of Russia’s malign and subversive information efforts. Considering the Kremlin’s track record of operating mass influence operations, it is only a matter of time before pro-Russia actors attempt to infiltrate the organization—if they are not already attempting to. NAFO’s increasing popularity, attributed to its inclusivity of known and anonymous members, makes the group vulnerable to scammers. Given that the purpose of pro-Kremlin disinformation is to manipulate truthful information and twist it to suit the regime’s interest, masquerading as fellas could be an easy way to sow distrust from within.

The increased alignment of anti-Western narratives promoted by Russian and Chinese state and non-state entities on Twitter related to Ukraine has exacerbated the need to expose disinformation and prevent it from going viral. Perhaps Western governments can provide relevant online communities with the debunking ammunition they need to counter disinformation on pertinent platforms in the way they see fit. This would by no means force such online communities to respond or behave in a certain way but simply offer them the optionality of correcting disinformation by challenging such narratives with accurate information.

In today’s digital age, the internet is at the forefront of ideology and is undisputedly the dominant source of news and information for consumers worldwide. Narratives increasingly shape outcomes by feeding biases and fears that cause populations to think, act, and even sway public opinion to vote in certain ways. NAFO has shed light on new methods for countering state-sponsored disinformation, highlighting the importance of assembling and backing online movements seeking to set the message straight in the cyber world. Disarming disinformation campaigns in the future will require a shared responsibility among those who govern and the governed.

Maximiliana Wynne has completed the International Security and Intelligence Program at Cambridge University, holds an MA in Global Communications from the American University in Paris, and has previously studied Communications and Philosophy at the American University in Washington, DC. Her research interests are related to threats to international security, such as psychological warfare.