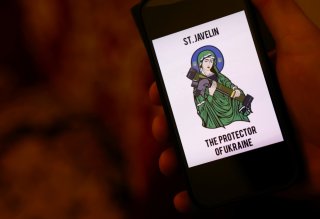 Ukraine has shown the world how to successfully fight against destructive propaganda and preserve its national identity through the use of social media. Whether it is highlighting the devastating destruction of war or announcing significant foreign policy decisions, Ukrainian tweets and memes are there. Humor cannot be effectively deployed on the battlefields of Crimea or the Donbass but can keep Ukraine in the news cycle, helps it articulate its national identity and sovereignty against Russia, and garner support from a broad international coalition.

The strangling pictures of the Bucha genocide, tortured prisoners of war in Olenivka, and millions of children and mothers fleeing the war are definitely not a laughing matter. War is not comedic, however, Ukrainians have used jokes to win the hearts and minds of people all over the world and help them overcome “Ukraine fatigue.” The internet speaks in memes: a picture of the Blessed Virgin Mary holding a Javelin anti-tank missile and a sweet Shiba Inu dog do the trick. These icons have unified a global community of supporters. Christian Borys, a Canadian entrepreneur, invented Saint Javelin as a charity to “rebuild Ukraine” and became the symbol of the “special thread operation” to mock the Russian invasion. Only this charity produces T-shirts and other apparel, not refugees and destroyed cities.

Saint Javelin is also a platform for the Twitter-based #NAFO community to fundraise for the Georgian Legion and combat Russian propaganda. The North Atlantic Fella Organization’s Shiba Inu dog appears on memes antagonizing Russian sympathizers and officials. The Saint Javelin NAFO cooperation is not only in the “business to rebuild” Ukraine in a material sense but also strengthens the war-torn society. On top of that, creating icons, myths like Snake Island, and legendary memes such as NAFO are branding messages for Ukraine. All are fundamental for protecting national identity that dovetails with hundreds of years of history.

Ukraine, along with other former Soviet states, has had to reestablish its sovereign statehood and national identity since it declared independence in 1991. Meanwhile, Russia has been trying to erase Ukrainian culture. Make no mistake, Ukraine has proven its ability to defend itself and beat Russia with its own weapons. Ukraine does it in self-defense to preserve and nurture an independent republic.

Russia fights for the past but Ukraine fights for the future. Sovereignty matters but culture is also part of Ukraine’s national identity. Winning the culture war through social media requires defeating Russia in an information war. Humor is a powerful tool; it brings people close to each other while maintaining a safe distance from the Kremlin and the disturbing images of the war. It is a method of self-protection and self-preservation. Besides, tragic comedy is an old tool often found in literature and films. Movies such as Dad’s Army, the Inglorious Basterds, and the evergreen Monty Python combined the themes of warfare and humor in a uniquely comforting manner.

Official releases are not exempt from this practice. Ukraine’s Ministry of Defense has deployed a new vocabulary during the war. One statement declared that “A squad of orcs has been repelled.” Citing J.R.R. Tolkien’s evil monstrous anthropoid creatures is a creative way to describe the enemy. Metaphors matter and by calling Russians Orcs, Ukrainians are also striking back against the Orwellian culture creator and Russian writer, Kirill Eskov. In his 1999 version of the Lord of the Rings, The Last Ringbearer, the evil Gandalf and his elves wage unremitting war on the peaceful realm of Sauron. Eskov’s heroic winner destroys the elves’ treacherous magic, leading its empire into a new age of progress and prosperity. So believes Vladimir Putin’s Russia.

Ukraine is undoubtedly winning the meme war to preserve its national identity and lectures the world on how to do it. Contrary to Putin’s manifesto, no sovereign nation is a fiction. Supporting the right to national identity is a moral obligation; ensuring that this right can never be questioned and violated is vital. The immense Ukrainian and global response to Putin’s war to annul Ukrainian culture and identity proved that acknowledging the universal right to national identity is crucial. Memes, humor, and ridiculing the enemy are one way to do it and Ukraine has shown the West how.

Mónika Palotai is a Visiting Research Fellow at the Hudson Institute, specializing in EU and International Law, and energy security.