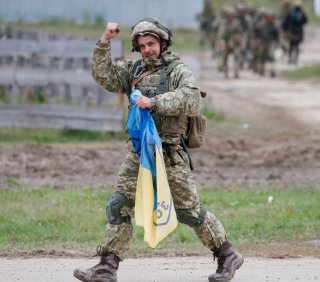 Top Ukrainian military officials announced on Monday that the country’s flag has been raised on Snake Island.

“The military operation has been concluded, and … the territory, Snake Island, has been returned to the jurisdiction of Ukraine,” Natalia Humeniuk, a spokesperson for Ukraine’s southern military command, told reporters. “On the island of Zmiiny [Snake Island], the Ukrainian flag was returned again,” added the Ukrainian military, according to the Guardian.

But Kyiv later had to clarify its remarks, with Humeniuk saying that "the flag was delivered to the island by helicopter” but has not yet been hoisted. “It will wait for the arrival of the troops, then it will wave. No one landed on the island. So who will install it, stick it in, raise it? And no one will risk people for the sake of a photo for the media,” she said.

Humeniuk added that the Ukrainian military’s earlier statements about the flag being raised should be “understood metaphorically.” It is unclear how exactly the Ukrainian flag was “delivered” to the island, given Kyiv’s assertion that no Ukrainian troops have arrived there following the Russian withdrawal.

Humeniuk’s phrasing suggests that a package containing the flag could have been air dropped by helicopter, but that, too, would have presumably carried risks given the nearby presence of Russian military assets. Though Russian forces are no longer on Snake Island, Russia’s Black Sea Fleet continues to control much of Ukraine’s Black Sea coast.

Russian commentators seized on the apparent discrepancy in Kyiv’s account of the flag being raised. “Ukrainian forces are in no hurry to return there because, as Humeniuk correctly described, this rock [Snake Island] is a sitting duck,” wrote Russian political commentator Vladimir Kornilov. “To stage an air landing there, as Ukraine tried to do several times, could be costly for Ukraine and lead to further losses. Of course they could try to raise the flag there after landing on a small naval vessel. It would not be so costly and could possibly even work. But, as you can see, they didn’t even risk that,” Kornilov continued.

Russian troops abandoned Snake Island, a strategic outcrop located to the southwest of Odessa, last week, calling it a “goodwill gesture” to show it is not obstructing United Nations efforts to establish a humanitarian corridor out of Odessa for unimpeded grain exports. Ukraine says it drove Russian forces from the island following an overnight assault. In May, Ukraine’s military expended considerable resources over the course of several failed attempts to retake the island, which could have been used by Russia as a forward staging post to threaten Odessa and potentially put pressure on NATO’s southeastern flank.