What the Loss of Snake Island Means for Russia 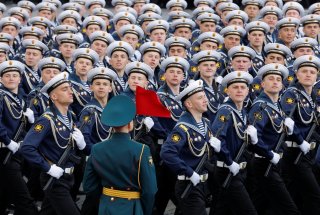 Russian forces have abandoned the strategic outpost of Snake Island, casting Moscow’s war aims into question as the Ukraine conflict grinds into its fifth month.

Russia’s Defense Ministry spokesman Igor Konashenkov announced on Thursday that the Russian military has withdrawn from Snake Island. “On June 30, as a step of goodwill, the Armed Forces of the Russian Federation completed their assigned tasks on Snake Island and withdrew the garrison stationed there. Thus, it was demonstrated to the global community that the Russian Federation does not interfere with the efforts of the UN to organize a humanitarian corridor for the exports of agricultural products from Ukrainian territory,” Konashenkov said.

The Ukrainian outcrop of Snake Island, located to the southwest of the port city of Odessa, was captured by Russian troops in the early stages of the Ukraine war. Russian forces successfully repelled a series of attempts by Ukraine’s armed forces to retake the island over the course of May—experts say recent deliveries of Western howitzers and anti-ship missiles finally tipped the scales in Kyiv’s favor.

The Kremlin framed the abrupt withdrawal as a goodwill gesture aimed at alleviating the global food insecurity crisis, but there was no prior indication that Moscow was considering plans to take any such steps. Moreover, the decision does not seem consistent with the stance taken by Russian officials in ongoing grain export talks. Russia has consistently framed the impending hunger crisis as primarily the fault of the Western sanctions regime established in the aftermath of Russia’s February 24 invasion of Ukraine. Russian president Vladimir Putin rejected the claims of Ukrainian and Western officials that Russia’s naval blockade is preventing millions of tons of grain from leaving Ukrainian ports, arguing in a recent interview that Ukraine is free to pursue alternative grain export routes through Poland, Romania, and Belarus.

Russian politicians attempted to square Moscow's cited reason for abandoning Snake Island with the Kremlin’s previous statements by appealing to popular perception. “Today we hear a lot of noise about Russia facilitating the global food crisis,” said Alexey Chepa, member of the Russian State Duma. “Those small deliveries, on a global scale, that can be carried out from the territory of Odessa through maritime routes don’t solve the problems created by the sanctions war [against Russia] and consequences of the [Covid-19] pandemic even a little bit. We understand that the accusations against Russia are absurd—nevertheless this decision was taken to deprive our opponents of the ability to exploit this topic,” Chepa added, according to Russian media.

Kyiv rejects Moscow’s rendition of events, claiming instead that it drove Russian forces from the island after a massive overnight assault that allegedly cost Russia hundreds of millions of dollars in military equipment. Ukrainian president Volodymyr Zelenskyy hailed the development as a victory, announcing that Snake Island is “free again.” It does not appear that the Ukrainian military, which has expended considerable resources since the war began to dislodge Russia from Snake Island, has any immediate plans to garrison the small maritime territory. The island is a no-man’s land for the time being, as Russia’s Black Sea Fleet retains control over much of Ukraine’s Black Sea coast. Russian lawmaker Alexey Chernyak said on Friday that Snake Island remains under Russian control in the sense that it is still within range of Russian missile systems and nearby warships, preventing Ukraine from effectively reclaiming it. Still, the loss of Snake Island as a forward staging point deals a blow to Russia’s ability to threaten Odessa, deprives Moscow of a key means of controlling shipping lanes for Ukrainian grain, and takes out of play the possibility of the Russian-held enclave—which the Russian military reportedly intended to reinforce with long-range S-400 missile systems—being used to put pressure on NATO’s southeastern flank.

There is nothing to suggest that the abandonment of Snake Island has prompted Moscow to revise its war aims, which have remained largely unclear since the Russian invasion commenced on February 24. Experts say the Kremlin has deliberately couched its overarching objectives in vague terms, with Putin referring to the conflict as a “special military operation” to “de-Nazify” and “de-militarize” Ukraine, in order to lay the groundwork for a wide range of possible endgame scenarios that can be presented to the Russian population as a decisive victory over Ukraine and the West.

To Ukraine’s east, Russia’s Donbass offensive appears to be slowly succeeding as Russian and Russian-aligned separatist troops inch closer to expelling the Ukrainian military from the region. Russian forces continue to pressure Odessa, which is widely believed to be one of the war’s major prizes, with a deadly crescendo of airstrikes. Citing plans discussed by top military officials, Russian politicians and commentators have speculated that the Odessa axis could become the war’s new front after the Donbass. There is nothing to suggest that the loss of Snake Island, viewed by Moscow as a minor setback at worst, has upended these reported aims.