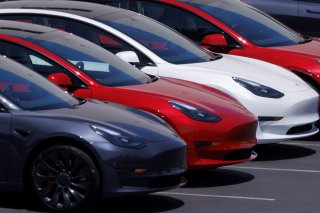 Tesla this week began selling a new adapter that will allow some Tesla vehicles to plug into electric vehicle chargers besides Tesla Superchargers.

The adapter is called the CCS Combo 1 Adapter, and it sells on Tesla’s website for $250.

According to The Drive, the new adapter “will allow certain Tesla vehicles to plug into chargers from Electrify America, ChargePoint, EVgo, and more.” The Tesla models that will work with it include the latest Model 3 and Y and the “facelifted” Model S and X.

Tesla had announced in 2020 that such a product was on the way, although the announcement was from the company’s South Korean subsidiary.

“Tesla owners can conveniently recharge their vehicles at thirty-three Supercharger stations located at the heart of transportation, and more than 150 Destination chargers located at popular hotels and restaurants,” Electrek reported in December 2020. “In addition, the CCS1 charging adapter is released to enhance the customer experience by allowing access to public charging networks nationwide.”

Tesla has also recently indicated that it plans to open its charging network to non-Tesla cars.

Such changes may represent a critical turning point in the shift toward electric cars. A significant thing holding back the adoption of electric vehicles has long been “range anxiety,” or the fear that cars would run out of power while far away from the nearest charging station. Making charging universal or something close to it would likely alleviate those concerns.

“A century ago, America ushered in the modern automotive era; now America must lead the electric vehicle revolution,” U.S. Transportation Secretary Pete Buttigieg said in February. “The President’s Bipartisan Infrastructure Law will help us win the EV race by working with states, labor, and the private sector to deploy a historic nationwide charging network that will make EV charging accessible for more Americans.”

“Americans need to know that they can purchase an electric vehicle and find convenient charging stations when they are using Interstates and other major highways,” Deputy Federal Highway Administrator Stephanie Pollack said simultaneously. “The new EV formula program will provide states with the resources they need to provide their residents with reliable access to an EV charging station as they travel.”