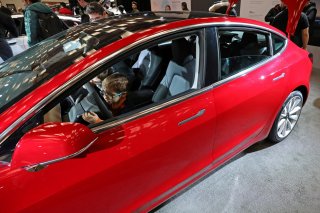 Elon Musk and Tesla have dethroned Toyota to become the world’s most valuable automaker.

With a market cap now valued at about $185 billion, the next-gen electric carmaker is worth more than Toyota, Honda, Volkswagen Group and Daimler.

Tesla, which only became profitable just this year, has really separated itself in terms of valuation from its chief U.S. rivals, including Ford, GM and FCA.

GM is roughly worth $41 billion, Ford at $27 billion and FCA has about a $20 billion market cap. For a moment, the market valued Tesla more than all three combined.

Earlier this year, Tesla CEO Musk, who is also the majority owner and CEO of SpaceX, enjoyed a payout of about $700 million as the company’s stock price kept on rising. He doesn’t receive a salary from the company, but he still earns stock options at rock-bottom prices, which he can sell whenever he sees fit.

With its stock price now sitting at about $1,000 per share, there continues to be skeptics abound. In January, analysts at Bank of America forecast an average stock price of only $350 for the rest of the year.

Tesla’s stock did sink to that level in March as the coronavirus pandemic took hold, but it has since made a remarkable comeback.

There are, however, plenty of analysts who are positive on the company’s future prospects. Just this week, Wedbush Securities analyst Dan Ives said he thinks it still has “room to run further,” citing “game-changing” developments as his reason.

“While the stock has been roaring higher, we believe the main fundamental catalyst continues to be the massive China market which is showing clear signs of a spike in demand for Musk & Co. heading into the rest of this year,” Ives wrote.

Not only that, the company won’t deliver its first car, the Tre battery-electric semi-truck, until next year and won’t make any use of its Arizona plant for eight more years.