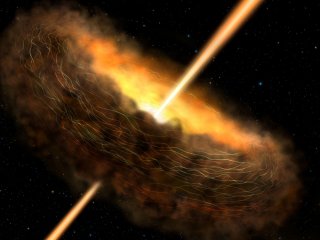 Trillions of years from now, when the universe takes its last breaths, there won’t be a spectacular bang, but only stars that “very, very slowly fizzle.”

According to a new study that has been accepted for publication in the Monthly Notices of the Royal Astronomical Society, that’s the finale awaiting our 13.7 billion-year-old universe.

“It will be a bit of a sad, lonely, cold place,” the study’s author Matt Caplan, an assistant professor of physics at Illinois State University, said in a statement.

“It’s known as ‘heat death,’ where the universe will be mostly black holes and burned-out stars.”

Caplan added that amid the darkness, there could be explosions of the remnants of stars that were never supposed to explode. In today’s universe, massive stars die in supernova explosions, while smaller ones tend to die more with a whimper—shrinking and eventually becoming white dwarfs.

“Stars less than about ten times the mass of the sun do not have the gravity or density to produce iron in their cores the way massive stars do, so they can’t explode in a supernova right now,” Caplan said.

“As white dwarfs cool down over the next few trillion years, they’ll grow dimmer, eventually freeze solid, and become ‘black dwarf’ stars that no longer shine.”

These black dwarfs will be made mostly of lighter elements like carbon and oxygen and will be roughly the size of Earth—but with our sun’s mass, the study noted.

Moreover, the nuclear reactions would likely continue. Those reactions would be slow and cold but would eventually turn the black dwarf into iron and create a supernova.

Caplan calls his theoretical explosions “black dwarf supernova” and calculates that the first one will occur in about “ten to the 1,100th years.”

“In years, it’s like saying the word ‘trillion’ almost a hundred times,” he said.

“If you wrote it out, it would take up most of a page. It’s mindbogglingly far in the future.”

Only about one percent of all stars that exist today—about a billion trillion—will end their lives this way, with the most massive black dwarfs exploding first. Eventually, the universe will fall into silence.

“It’s hard to imagine anything coming after that—black dwarf supernova might be the last interesting thing to happen in the universe. They may be the last supernova ever,” Caplan said.

“Galaxies will have dispersed, black holes will have evaporated, and the expansion of the universe will have pulled all remaining objects so far apart that none will ever see any of the others explode. It won’t even be physically possible for light to travel that far.”