As the Universe Gets Older, the Chances for New Life Will Decline 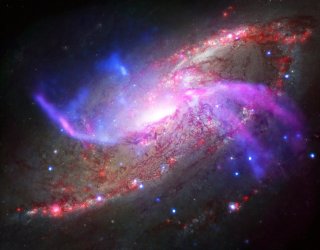 As our galaxy and universe further age, the chance for life to exist will increasingly decline, according to a team of Aussie researchers.

The scientists have discovered that rocky exoplanets that formed early in the life of the galaxy seem to have had a better chance of developing a magnetic field and plate tectonics—which are considered favorable to the evolution of life.

This could mean that if other life-forms exist in the Milky Way galaxy, they likely developed earlier than later. Planets that formed more recently have a lower chance of developing life.

“Plate tectonics is important for habitability, and it looks like the optimum conditions for plate tectonics existed for planets forming early in the galaxy’s lifespan, and may be unlikely to easily recur,” Craig O’Neill, a professor at Macquarie University, said during a virtual presentation at the recent Goldschmidt geochemistry conference.

“For life, maybe that was as good as it gets.”

O’Neill suggested that plate tectonics on Earth act like a thermostat for the planet. So, exoplanets that haven’t yet developed plate tectonics likely don’t have the right conditions to host life.

“This doesn’t just affect the surface temperature, this means that the core stays hot, which inhibits the development of a magnetic field,” O’Neill said.

“If there’s no magnetic field, the planet is not shielded from solar radiation and will tend to lose its atmosphere. So, life becomes difficult to sustain. A planet needs to be lucky to have the right position and the right geochemistry at the right time if it’s going to sustain life.”

Researchers know that the overall chemical balance of our galaxy has changed over billions of years, as vast amounts of material have coalesced into stars and planetary bodies or have been expelled through supernovas.

This means that the interstellar material available to form future planetary bodies is significantly different compared to what was present in the early galaxy. Perhaps humans on Earth will be the last in an unknown line of life-forms to thrive in the Milky Way galaxy.

“So, the planets which formed earlier did so in conditions favorable to allow the development of life . . . these conditions are becoming increasingly rarer in our galaxy,” O’Neill said.