100 Megabits Per Second Internet Across U.S.? Congress Is Pushing For It. 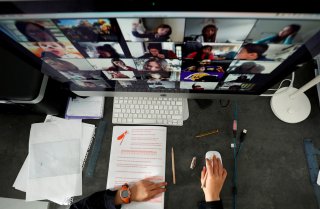 President Joe Biden, in his brief time in office, has been pushing for improved broadband, especially in the nation’s poorer and more rural areas.

The president proposed during his campaign to devote $20 billion to improving the nation’s broadband infrastructure, in order to eliminate America’s “broadband deserts.” Per Reuters, Congress is debating whether to include money for broadband in the coronavirus rescue package that’s currently being debated.

Now, a bipartisan group of senators has sent a letter asking not only for better broadband but for faster speeds.

“We welcome the Biden Administration’s commitment to deploying affordable, high-speed broadband across the country to help bridge America’s digital divide and remedy persistent digital inequities,” the letter stated. “As you pursue this important goal, we strongly urge you to update federal broadband program speed requirements to reflect current and anticipated 21st century uses and align the definition of what constitutes high-speed broadband service across federal agencies.”

The letter also called for improved upload as well as download speeds, and also for speeds to be as fast in rural areas as in other parts of the country.

“Our goal for new deployment should be symmetrical speeds of 100 megabits per second (Mbps), allowing for limited variation when dictated by geography, topography, or unreasonable cost,” the letter said. “While we recognize that in truly hard-to-reach areas, we need to be flexible in order to reach unserved Americans, we should strive to ensure that all members of a typical family can use these applications simultaneously. There is no reason federal funding to rural areas should not support the type of speeds used by households in typical well-served urban and suburban areas.”

King, who is on caucuses with the Democrats, had written a letter last year asking streaming service companies to make their product free over the holidays, to encourage Americans to stay home and stop the spread of coronavirus. Those companies, including Netflix, Amazon, Apple, and Disney, did not take up the senator on his offer.

Deese, the NEC director, appeared at International CES in January, where he laid out the administration’s tech policy agenda in an interview with Consumer Technology Association CEO Gary Shapiro. In that interview, Deese mentioned broadband, as part of the Biden Administration’s tech agenda.

“The president-elect really takes a perspective of what is going to be good for the economy,” Deese said at CES. “And his metric of economic health is whether American families and the American middle class is able to have economic dignity and be able to achieve their economic objectives.”