139,300: That's How Many Vehicles Tesla Delivered in 3rd Quarter 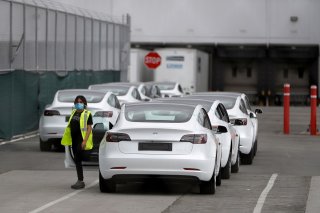 Tesla announces its delivery numbers separately from its quarterly earnings.

“Overall we would characterize these delivery numbers as DeChambeau-like strength from Tesla as the company hit the high end of bullish whisper expectations for the quarter,” Ives wrote. “We believe China was a major source of strength this quarter and a 139k number should translate into a nice EPS upside vs the Street for 3Q with the profitability trajectory on an upward path moving forward.”

Wedbush maintained their “neutral” rating on Tesla’s stock, and press target of $475.

Tesla’s stock, despite the numbers, had dropped just over 5 percent Friday, as part of what CNBC called a general selloff following the news that President Trump had tested positive for the coronavirus.

It was part of a big news day for Tesla as, per CNET, CEO Elon Musk revealed that the company will “for sure” launch in India in 2021. The news, in Musk fashion, came in a 3:32 a.m. tweet, in reply to an account called Tesla Club India, which appears to sell t-shirts with slogans like “India Wants Tesla” and “India [hearts] Tesla.” After the account asked Musk about any progress in regards to plans for an India launch, the CEO said “next year for sure.”

And per Electrek, Tesla has released a software update that will allow cars to drive through green lights, with Autopilot.

“This software update contains improvements to our new Traffic Light and Stop Sign Control feature,” a note in the update says. “Your vehicle will no longer require driver confirmation to continue through green lights while there is a lead vehicle ahead of you and not in a turn lane. Every driver is responsible for remaining alert and active when using Autopilot and must be prepared to take action at any time.”

This follows a report out of Canada last month that a Tesla was pulled over while driving on Autopilot, while the car was going 90 miles per hour and the car’s driver and passenger were both asleep and reclining.

Tesla had reported a profit of over $100 million, and revenue of $6.04 billion, in the second quarter of 2020, beating expectations for the quarter. The company also moved last month to sue the federal government, in relation to tariffs that were placed on materials they use in manufacturing.