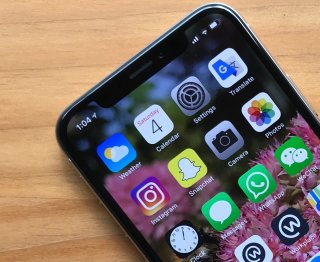 When it comes to who rules the competition among the world’s mobile operating systems, it’s hands down Android. It’s still a two-person race, but Android is the definitive leader with 70-percent market share.

So, in this particular case, Apple is in a position that it often does not find itself in—as an underdog. These stats regarding market share could surely change within the next few years, but it seems that Apple is more focused on how it can continue to improve its own iOS rather than worrying about its archrival.

Consumers have taken notice, and to highlight these positives, here are five things that the iPhone can do better than Android.

First off, Apple’s iOS is generally faster and smoother. Compared to the myriad of complaints that are often seen among Android users, Apple is mostly immune to that—although this is not to say that iPhones are completely hiccup-free.

One reason is that Apple usually does a great job with timely updates that keep performance in tip-top shape. If your particular iOS device qualifies to receive the latest update, you can rest assured that it will get it as soon as it launches.

Next up is how simple it is to use the iPhone and iOS. The overall look and feel of the iOS may have been tweaked over the years, but it works pretty much the same as it did in the late-2000s. No doubt, despite bringing on-board enhancements like Siri, the iPhone always seems to have the common-sense-driven comfort level of the user in mind.

In at No. 3 is its compatibility with computers. For the iPhone, it is obviously the MacBook, and the way that you can toggle actions between the phone and laptop is pretty amazing. For example, if you have your iPhone nearby, you can use your MacBook to send and receive messages and even take phone calls. The AirDrop feature is also a huge favorite, as this enables you to easily transfer photos and videos via Wi-Fi from your iPhone to a MacBook.

Not to be outdone is having access to the best apps first. Despite Android boasting a robust offering of apps in its own stores, there is no question that the iPhone is still favored by developers when launching new apps. Case in point: It took several months for the wildly popular game Fortnite to make its jump from iOS to Android.

Finally, if you ever encounter a problem with an iOS device, you’re definitely in better hands because you’ll surely be receiving superior support. Apple customers have access to a vast database of useful help articles on the company’s website and can even get assistance via live chats or appointments at an Apple Store Genius Bar. Generally, Android users don’t get to enjoy this type of direct communication.