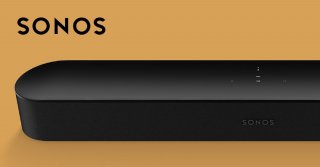 Sonos may be one of the most respected names in wireless home entertainment, but until this week, it had never released a product with Dolby Atmos support. On Wednesday, the company announced the arrival of the Sonos Arc, a "premium smart soundbar" that indeed supports Atmos.

The Arc will arrive June 10 at a listed price of $799, and is available in matte black and matte white. The existence of the product had been leaked earlier in the week.

Sonos' announcement of the Arc touts the inclusion of 11 high-performance drivers and a 270-degree rounded plastic grille, as well as the assistance of "Oscar-winning mixing engineers” in its creation. It can be controlled through an updated version of the Sonos app, which was announced earlier this spring, along with the company's new S2 platform.

Dolby Atmos, the surround sound system that includes "height"-based channels, has been available in home theaters since 2014.  Content featuring the technology is now available, Sonos says, from 25 video streaming services and TV providers.

The company also announced other new products, including the third generation of the Sonos Sub and the Sonos Five, which is the successor to the Play:5. Those are also set to arrive June 10, although the new app will be available two days earlier.

"Home has never played a more important role in our lives and we've always been about making the home more enjoyable with great sounding products and new experiences. Arc brings the sounds of our favorite shows and artists to life like never before," Patrick Spence, Sonos' CEO, said in a statement.

"Our goal is to make any room you have a television a place you can easily enjoy all of the great streaming video and music that exists today. Arc illustrates our commitment to brilliant sound and premium design, and sets a new standard for soundbars."

Sonos drew some furor among its customers back in January when it announced that, this month, some of its older products, including the Zone Players, Bridge, Connect and the first generations of  Play:5, Connect and Connect: Amp, would no longer receive updates or new features.  It gave customers using those products the choice of continuing to use the products without updates or "trade up to a new Sonos product with a 30% credit for each legacy product you replace.”

The Verge reported in January of 2019 that it had obtained a leaked survey from Sonos asking if customers would pay $700 for wireless Atmos speakers.

Love Your New TCL or Hisense 4K Smart TV? The Chinese Government Made That TV.