ARRIVED: Vizio's Super Low-Priced OLEDs Can Now Be Yours 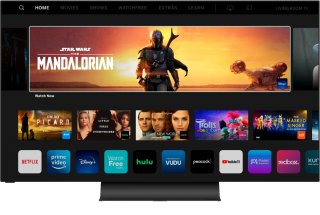 Vizio’s highest-end TVs are branded as “Quantum,” which is a version of the QLED technology. But the company announced earlier this year that it would also bring out OLED TVs.

In January, Vizio said that the OLED TVs were coming and showed them to the press, and in June, Vizio chief technology officer Bill Baxter described the OLED 4K HDR Smart TV line as “the single largest R&D effort in the company's history.” The TVs are branded as the “2021” OLED line by Vizio.

The 55- and 65-inch Vizio OLED TVs are now available at select Best Buy stores. The two models are priced at $1,300 and $2,000, and Best Buy is offering a $100 discount on each, through October 9. Both prices are lower than those of the LG and Sony OLED models, although unlike the other manufacturers it doesn’t offer a 48-inch model.

The specs for the Vizio OLED TVs include  HDR10, HDR10+, Dolby Vision, and HLG capability, and Dolby Atmos passthrough. The model’s OLED panel is sourced from LG Display. Reviewed.com described the Vizio OLED models as “a triumph of display technology. Perfect black levels, rich color reproduction, and silky-smooth motion handling are just some of the TV's highlights, making it a clear competitor to LG's most affordable OLED TV series, the BX."

The review praises the TV’s “sensational contrast and color,” HDMI 2.1 support, and low price, while the listed cons include that it “doesn't get as bright as the competition,” and the lack of flexibility with its smart platform.

Tom’s Guide published a “hands-on” for the Vizio OLED TVs during CES in January, calling it Vizio’s “most impressive set ever.”

“During my time with the new OLED set, I was impressed with the noticeable difference in contrast and black levels offered between the OLED and even the top-of-the-line P-Series Quantum X, which was set side-by-side with the new model,” the site said. “While the P-Series X delivered bright and vibrant colors, the Vizio OLED had deep black levels that lent a sharpness to the 4K picture that even the best LCD-based TVs struggle to match. It's one of the defining differentiators between OLED and everything else, and it's undoubtedly part of why Vizio has chosen to embrace the technology as part of its premium TV lineup.”

RTINGS, the review site that covers new TVs extensively, tweeted this week they have received the Vizio OLED TV and will be reviewing it soon.

Vizio announced in September that it was adding the Apple TV ecosystem to its SmartCast interface, with three free months of the Apple TV+ streaming service, for Vizio customers with SmartCast-equipped TVs from 2016 and later.