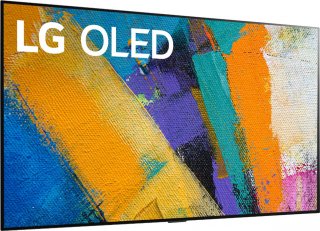 When LG Electronics introduced its “wallpaper” OLED TV in 2017, it eventually became a blueprint for future designs of this particular model.

Now called the GX Gallery Series, it really oozes that high-end premium look that few other companies can match. And best of all, it’s relatively affordable now, as the 65-inch model now boasts a price tag of $3,100 at Best Buy, a savings of $400.

Yes, it is still a bit pricey for many, but you will be on the receiving end of all the enhanced picture goodness that OLED panels are known for—sleek and slim design, fantastic picture quality, accurate colors, wide-angle viewing, deepest blacks and inimitable uniformity and contrast ratios.

As for this particular wallpaper TV, where the GX really shines is on the design front. It was difficult to imagine how LG engineers and designers could top the 2017 model, but that is exactly what they did.

Mounting this beauty on your wall—which could easily pass for chic artwork if it’s showing a modern painting—will bring about instant sophistication and improved spatial integration to all TV-viewing rooms. The GX somehow fits all of the necessary processing components, connections and speakers into its ultra-thin body, and as it tightly hugs the wall, it really does look stunning.

To keep it even more clean-cut, the set doesn’t really need a separate soundbar, but of course, you’re free to get yourself one if you need that extra thumping bass for your home entertainment.

This next-gen design would not have been possible without the much-vaunted OLED technology, which utilizes self-emissive pixels, jettisoning the need for backlighting that’s seen on LCD-based TVs, including Samsung’s highly regarded QLED lineup. Without this backlight, OLED sets can be designed slimmer (often thinner than smartphones) and are more environmentally friendly because they consume less energy.

“Like all great designs, the design of the GX Gallery Series feels completely natural and entirely unforced,” LG Electronics’ senior design researcher Kim Hyung-won said in a news release. “Yet, arriving at the finished product wasn’t at all easy.”

Added LG’s senior design researcher Kim Yoon-soo: “At the very outset, the team spent a significant amount of time looking through an enormous amount of consumer research to see what people actually want in a TV, and to discover where they could add value. Then for the next two years, LG’s designers and engineers worked tirelessly to overcome the many technical and design challenges that presented themselves, before finally delivering what can accurately be described as a true masterpiece.”

The hard work has indeed paid off—as the 65-inch GX Gallery Series captured the “Best of the Best” title at this year’s Red Dot Design Awards and the top honors at the iF Design Award 2020.